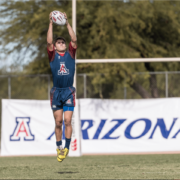 Leading into the weekend Cal were the early favorites by virtue of their impressive 11-1 record heading into the tournament, and by their stranglehold on the competition over the last half-decade. However, in the opposite pool, Arizona were feeling quietly confident about their chances having had an equally impressive preseason, finishing a close second in the Silicon Valley 7s Fall College Classic.

Both teams advanced to the championship game with unblemished records. However, Cal were hampered by injuries to key players Aidan Flynn and Zachary Tavenner. In the early goings, it did not seem as though those injures would slow Cal down, as they shot out to a 12-0 lead. Arizona settled and came back to level the scores at 12 going into the half. The second half was a see-sawing affair with Arizona claiming their first lead of the game scoring two minutes into the second stanza to make it 19-12. A minute later, Cal were able to equalize through a Thomas Robles try and Matthew Coyle conversion. With two minutes left in the game Arizona again stepped up to take the lead on the back of Matt Rogers to take a 26-19 lead; however, Cal again showing their determination and pedigree were able to equalize as time expired with Elliot Webb scoring his 2nd try of the contest. With the scores level both teams caught their breath and prepared for sudden death overtime. Overtime was short-lived, it had a lifespan of twelve seconds to be exact, as Dante Weeks caught the kick-off and ran in to score the winning try untouched.

With their win, Arizona has now qualified for the 2018 7s National Championship. Rich Cortez, Director of Collegiate Rugby at USA Rugby had this to say about Arizona’s win: “It was great to see [Arizona] finally pushed through, continuing their strong legacy in collegiate 7s. The legacy first created by Dave Sitton and now continued by Sean Duffy. It’s a testament to good coaching, institutional support and continuing alumni support, to turn good teams into strong programs. Competition is good for all of us, it creates and excitement for generations.”