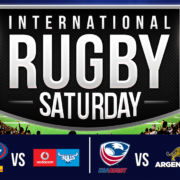 LAFAYETTE, CO – Coming into the Americas Rugby Championship for the first time as defending champions, the United States Men’s 15s look to kick off the 2018 competition in leading fashion as they head to an opening match with Argentina XV. The match will headline a double-header feature, following a Super Rugby pre-season showcase between the Vodacom Bulls of Pretoria and Cape Town’s DHL Stormers, February 3rd at StubHub Center in Los Angeles. Presale tickets will be available November 16.

The 5pmPT kick off combining the United States and Argentina XV will lead way for the first of three Men’s Eagles home matches. Poetically, this same Argentina XV squad played host in Buenos Aires when the US claimed the 2017 ARC title in early March. Narrowly defeating the South American powerhouse by a bonus point, the upcoming rematch looks to provide some early drama as the new year gets underway.

“Opening the season against a runner up should deliver some added excitement in Los Angeles,” remarked Men’s Eagles Head Coach, Gary Gold, “There is a suitable amount of anticipation we have for the men here, starting off the series with a well contested matchup.”

StubHub Center in Los Angeles will host the two fixtures as part of USA Rugby’s long-term strategy in the region, leading to the Summer Olympics in 2028. Southern California has in fact been the fastest growing High School and Youth region over the last decade for USA Rugby. The event is collaboration between USA Rugby commercial arm, Rugby International Marketing, and AEG Rugby.

“We’re anticipating a strong year in 2018, with the ARC opening here in the US,” said USA Rugby CEO, Dan Payne, “Southern California has always been a great rugby community, partnering with AEG Rugby and Super Rugby certainly amplifies that experience for fans.”

“Super Rugby is one of the premier club rugby competitions in the world, spanning 15 time zones and five countries.” said Super Rugby CEO Andy Marinos, “Even though this is a pre-season match, we are excited that rugby fans in the United States will get the opportunity to enjoy and witness Super Rugby first hand.”

Super Rugby makes its United States debut with a leading matchup between the Vodacom Bulls and DHL Stormers competing in a pre-season fixture prior to the Eagles kick off. The South African rivals last met in July where the Bulls 2017 season came to a close and the DHL Stormers continued on to the Super Rugby quarterfinals.

Western Province Rugby Group CEO, Paul Zacks added, “This is a great opportunity to share the success of the DHL Stormers team and brand with a new and growing market. The world is continuously becoming a smaller place, so exploring new and growing areas of the game forms part of our vision, as we strive to become a truly high-performance organization with global appeal.”

“This Super Rugby showcase, is bigger than just the game.” said Barend van Graan, CEO of the Blue Bulls Company, “It should be seen as a step forward in growing rugby even faster in the States, and globally.”

Presale for the event begins Thursday November 16 – sign up for the USA Rugby Presale List at usarugby.org/tickets. General on-sale will begin Monday Nov 20.