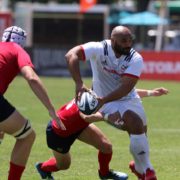 The fourth edition of the Americas Rugby Championship got underway in exciting fashion this weekend with victories for reigning champions USA, Argentina XV and Uruguay.

The USA Eagles, ranked a record high twelfth in the world following an impressive 2018, continued their fine form by recording an emphatic 11 try, 71-8 victory over Chile in Santiago. Argentina XV also made a winning start after overcoming visitors Brazil 54-3 in Neuquen.

The final match of the opening weekend saw Uruguay, who played much of the match with 14 men, snatch a dramatic 20-17 win over Canada with the last play of a hard-fought encounter in Montevideo.

Uruguay will take on Chile in round two on Friday, February 8 in Montevideo, while Brazil will host Canada the following day with both teams looking for their first victories of the competition.

The big clash of the weekend will see USA travel to face Argentina XV on Saturday with both teams looking to build on their opening round victories.

Staged for the first time in a Rugby World Cup year, the Americas Rugby Championship takes on added significance for Rugby World Cup qualified nations Argentina, Uruguay, USA and Canada, who will be looking to build on their preparations towards Japan 2019.