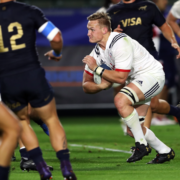 RIO NEGRO, ARG. – The USA Men’s Eagles (15s) have named their match-day 23 to face two-time runners-up Argentina XV in the second round of the Americas Rugby Championship 2019 this Saturday, Feb 9 at 3 PM ET, LIVE on FloRugby.

Saturday’s lineup features a cumulative total of 356 test caps with 12 of the 23 players having played in last year’s first ever win over Argentina XV. Eagles Head Coach Gary Gold has made one change from the previous week’s roster with Dylan Fawsitt in at reserve for James Hilterbrand.

The USA saw nine players combine for 11 tries last week in a sizzling 71-7 victory over the Chileans while flyhalf AJ MacGinty claimed a hat trick with three of his own. MacGinty also made five conversions, bringing his final tally to 25 points where he earned ARC 2019 Player of the Week honors.

Hooker Joe Taufete’e was in good form as well, scoring his 15th try to tie Irish veteran Keith Wood as the highest scoring front row forward in test match rugby history. Taufete’e is only one try away from breaking the record though Saturday’s match won’t count as Argentina XV play as a secondary national side. Similarly, test caps will not be awarded for the game.

Already making a name for himself, Tadhg Leader came off the bench last week to score a try and kick his own conversion in his debut with the national team. Leader is also Captain of the New England Free Jacks of Major League Rugby and previously led San Diego Legion to the inaugural MLR playoffs.

In the absence of Blaine Scully (injury) wing Marcel Brache continues his tremendous leadership as Captain. Brache led the USA to their first bonus point victory of the competition last week.

Head Coach Gary Gold said: “Argentina XV will be a massive physical challenge for us this week, not only at the breakdowns but also they have a strong set piece. It’ll be important for us to keep our penalty count low as good discipline is extremely crucial in tight games. Consistency is also a critical factor in both our preparation and the way we assemble our team from week to week. We’re confident not only in the 23 players named to this roster but also that the contributions made by the guys not named will play a huge role in our efforts this week.”

The Eagles and Argentinians have faced each other three times in the ARC; the first two meetings resulted in a draw while USA claimed the first victory just last year. Since the inception of the Americas Rugby Championship at the senior level, the United States and Argentina XV have each either been champions or runners-up every tournament. The Americans have won the last two titles with Argentina XV winning the first in 2016.

The Argentinians will be buzzing from their own 54-3 bonus point defeat of Brazil last week. Both USA and Argentina XV sit atop the tournament standings with five points apiece.

Following Saturday’s battle, the tournament will pause for a bye week before the Eagles return for three consecutive matches on home soil. The team will face Brazil (Feb 23) in Austin, TX, as well as Uruguay (Mar 2) and rival-Canada (Mar 8) in Seattle, WA. Tickets are available at usarugby.org/tickets.

All Men’s Eagles matches of the Americas Rugby Championship 2019 may be streamed live on FloRugby exclusively in the USA.

LIVE on FloRugby in the United States