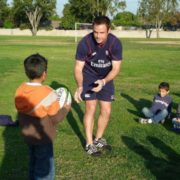 The USA’s own Kurt Weaver will referee three of fifteen games in the second edition of the Americas Rugby Championship. In all, eight referees from five of the competing teams will control games starting Feb. 3. Uruguayan Claudio Cativelli signals the start of the first game in Sao Paulo between Os Tupis and the Cóndores of Chile, all the way to the final whistle to be blown by Joaquín Montes, also from Uruguay, in Comodoro Rivadavia on Mar. 4, when Argentina XV and USA could possibly decide the champion team.

“We look forward to the tournament and working with the teams and players,” said Weaver. “The quality of play and matchups were very strong last year and we anticipate a raised level for this coming year’s tournament. I know all the referees are working hard preparing for their matches and we are excited for the opportunity.”

Cativelli is one of five referees designated to control two games – the others being Argentines Pablo Deluca and Damián Schneider, Derek Summers from the USA and Brazilian Ricardo Sant’Anna. Montes and Canadian Chris Assmus will referee one each.

Referees were appointed by World Rugby whereas Assistant Referees are national union appointments and a positive way to promote local talent. Given the high stakes involved in the tournament, seven of the referees will also have assistant referee roles, with other 20 officials in that capacity added to the group.

The Americas Rugby Championship is expected to deliver an increased number of international fixtures for American nations in every four year cycle, giving teams the opportunity to prepare for upcoming Rugby World Cups by scheduling a reliable program of International fixtures to supplement those already scheduled.

“As such, we are delighted to be announcing such a good group of referees and assistants for our tournament. It is a privilege to be working with such a group and it ensures that the games will be in very good hands.”

Four of the five referees that controlled games in 2016 are back, with Montes, Assmus, Schneider and Weaver banking on the experience of the inaugural tournament.

“Experience is crucial and we are delighted with the group of officials designated by World Rugby and their assistants provided by the home union at each game,” concluded Arnold.

To see the full broadcast schedule and standings for the Americas Rugby Championship CLICK HERE.