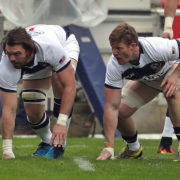 Head Coach John Mitchell’s squad has seen scheduled, as well as unplanned, turnover following the Round One victory against Uruguay in nearby San Antonio. Wing Zack Test suffered an injury at Toyota Field while the likes of AJ MacGinty and Blaine Scully have returned to their professional clubs. James Hilterbrand will captain the side from the front-row position of hooker when the U.S. lines up against the Tupis at 6 p.m. CT Saturday. The match will be broadcast live on The Rugby Channel to valid subscribers.

Changes made to this weekend’s roster come with work load and player availability well in the mind of the coaching staff, noted by five Round One starters included in the reserves. Hilterbrand, who earned his sixth international cap in a substitute appearance for debutant Peter Malcolm against Uruguay, will have scrum half Shaun Davies – in his third international appearance – as vice captain.

“As the guys know, we have a shared leadership group,” Mitchell said. “James has shown the maturity and is an experienced, traveled footballer. He understands the game and has become more and more committed each time he joins us, and it shows in the way he goes about his work.

“Davies is well-versed in managing and leading teams. He’s been a revelation in the way he’s gone about helping players, making sure players understand there’s a reason why we’re doing things. Those two working together is a good combination.”

Ben Tarr and Dino Waldren will prop alongside Hilterbrand, with the combination of Nate Brakeley and Nick Civetta returning to the second row. Todd Clever has been named in the reserves in favor of fresh legs in Tony Lamborn in the loose forwards group, with Al McFarland and John Quill again rounding out the pack following strong performances against Uruguay.

Nate Augspurger has held onto the No. 9 jersey for five consecutive international tests since last summer, but will make way for Davies’ first start at scrum half under Mitchell. The Team USA Rio 2016 Olympic Summer Games travel reserve does earn a start at wing with Test and additional squad members unavailable. Aaron Davis, top try-scorer in the first season of PRO Rugby and a former Division I football player at Southern Methodist University in Dallas, will make his international debut Saturday on Augspurger’s opposite wing.

Will Magie famously set up Scully’s match-winning try with a cross-field kick above the heads of the Uruguayan defenders as a substitute at Toyota Field. He replaces Ben Cima as the starting fly half, with last week’s debut No. 10 available in the reserves. Try-scorer and outside center Bryce Campbell will have JP Eloff by his side in the midfield and Mike Te’o behind him at full back.

“We want to get everyone starting,” Mitchell said in reference to starting XV decisions. “We’d like everyone to be better than last week. Everyone’s a week older in terms of the way we prepare. Guys are mindful of the limited opportunities presented to them with Rugby World Cup Qualifiers around the corner and it’s a critical time for a lot of these players.”

Deion Mikesell and Peter Tiberio were called into camp as cover and may play a part in the match against Brazil from the reserves. Cam Dolan also joined the squad for his scheduled availability of four match weeks.

Davis is the only Eagle earning a debut as a starter this week, with Tiberio an uncapped reserve.

“There’s experience available throughout this group,” Mitchell said of the 26-man squad for Round Two. “Cam’s been fully immersed and engaged in how we go about doing things but at least he has the opportunity to build his way in off the bench. We’re very grateful Tiberio and Mikesell have made themselves available on short notice. There have been a few challenges this week but we adapt to that and get on with it.”

Tickets starting at $20 are still available for Saturday’s match at Dell Diamond, which is hosting its second international test in as many years. The Eagles, as well as the AIG Men’s Junior All-Americans, defeated Canadian opposition at the venue last February. The match will be broadcast live to subscribers on The Rugby Channel beginning at 6 p.m. CT, while live match updates will be provided by USA Rugby’s Twitter account (@USARugby).