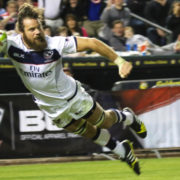 Dell Diamond in Round Rock, Texas, will host its second international test rugby match in a year this coming February when the Men’s Eagles take on Brazil in the Americas Rugby Championship 2017 competition.

The U.S. won its fourth consecutive game against border rival Canada with a raucous crowd of more than 7,000 supporters cheering inside the minor league baseball stadium this past February, and finished second in the inaugural ARC competition with two wins and a draw from three home matches. Ranked 36th, Brazil will visit Texas for its first-ever clash on U.S. soil Saturday, Feb. 11.

“We’re excited to host USA Rugby in the Americas Rugby Championship for the second consecutive year,” said JJ Gottsch, COO of Ryan Sanders Entertainment. “Bringing in events like this one not only showcase the versatility of Dell Diamond on an international level but really help grow the game of rugby here in Texas. We’re looking forward to growing this match and welcoming even more fans through the gates this year.”

Pre-sale tickets for the game in Round Rock will be made available Wednesday, Dec. 7, at 10 a.m. CT, before general on-sale begins Friday, Dec. 9, at 10 a.m. CT. Fans hoping to get early seats to the final home game before the summer months are encouraged to sign up for the USA Rugby Ticket Pre-Sale Email list if they have not done so already to receive relevant pre-sale information. Upon release, tickets can be purchased via Tickets.com.

The teams met for the first time in South America in the ARC earlier this year, where the Brazilians emerged from their encounter with a young Eagles squad victorious, 24-23. The return fixture follows the opening round of the 2017 competition Feb. 4, when the U.S. will host Uruguay in nearby San Antonio.

“It may not look like your typical rugby stadium, but Dell Diamond was a great home for the Eagles for a match that was a success on and off of the field,” USA Rugby International Events Director Kellie Cavalier said. “We knew we had to bring international rugby back to Round Rock, and we couldn’t be more excited to be doing it so soon.”

Dell Diamond also hosted last year’s World Rugby U20 Trophy qualifier match between the AIG Men’s Junior All-Americans and their under-20 Canadian counterparts, which ended with a miraculous, 50-meter penalty goal by the U.S. Three Americans from the MJAA squad have since gone on to receive their senior debuts under Head Coach John Mitchell, while additional age-grade talents joined up with the USA Rugby Selects development side in October.

Venue and ticketing details for the Feb. 4 match in San Antonio will be announced in due course. Each of the five Eagles fixtures during the Americas Rugby Championship competition will be broadcast live on The Rugby Channel (subscription required). Follow the Eagles on USARugby.org.