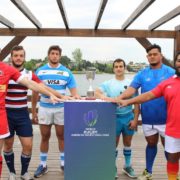 LAFAYETTE, Colo. – After a brief huddle in Fort Lauderdale, the Men’s USA Rugby Selects have arrived in Uruguay for the Americas Pacific Challenge. Head Coach Scott Lawrence and staff took a close look at recruited talent, finalizing a starting roster for the tournament set to air on The Rugby Channel.

Coach Lawrence’s takeaways after camp were a noticeable player balance, “The right mix for the outcome we’re after at an average age of 23,” said Lawrence, “Some second chance men who have provided feedback and leadership to others getting their first opportunity.  It’s all part of the development process.”

Lawrence continued, “Pete Malcom will captain the team for Saturday as a follow on to his All-American captaincy. Pete has proven the positive leadership that we need in our national teams.”

Six rostered players and will return to the APC squad after competing in the 2016 tournament. Alex Maughan, Benjamin Cima, Bryce Campbell, Hanco Germishuys, Jean-Paul Eloff, Chance Wengleski and Matthew Jensen will travel to Montevideo. The United States finished with a 1-2 record following 2016 play.

When asked about team mentality coming out of Fort Lauderdale and going into the opening match against Samoa A, Lawrence simply answered, “Burn the Ships.”

The Men’s USA Rugby Selects kick off from Montevideo on Saturday October 7 at 10:30amET, with following matches on October 11 and 15, against Uruguay A and Canada A respectively. All US matches will be available for viewing on The Rugby Channel.