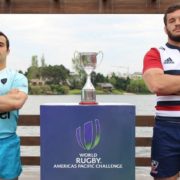 MONTEVIDEO, Uruguay – After a few days rest, the Men’s USA Rugby Selects will retake the field following an opening match loss to Samoa A on Saturday. Head Coach Scott Lawrence recognizes the team drive, but urges the focus on capitalizing, “I believe we showed that we can play attacking rugby and string continuity together. We just need to turn that into points.”

The Eagles hopefuls take on host squad Uruguay A, Wednesday Oct. 11th at 3pmET on The Rugby Channel.

The US played well early against Samoa A, but after an issued red card to Hanco Germishuys, found themselves in a quick deficit. When asked about Hanco’s status, Lawrence confirmed his availability for Wednesday’s match, “Hanco’s card was immediately dismissed by the citing commissioner upon our appeal, he will make the roster this Wednesday. It was an unfortunate call as we were on our way to the go ahead try with momentum in our favor.”

“Take the fight to Uruguay in the set piece,” continued Lawrence, “create scenarios where we can get [one on one] athlete on athlete in space; win total meters in defense.”

The roster will also update as Ben Landry has joined the tour for this game. “By the time this game is up we will have seen all of the players in the development touring squad in physical games. This will help us recommend men going forward to Gary Gold.”