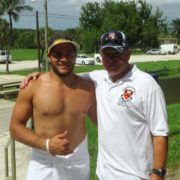 For four days prior to their inaugural Americas Pacific Challenge campaign, the USA Rugby Selects were able to practice as a unified team for the first time thanks to the generosity of USA Rugby Trust Golden Eagle Tom Pirelli. The team – which consisted of developing players from across the nation who were eager to compete on the international stage, many for the first time – was scheduled to fly to Uruguay out of Miami for the competition. Realizing Pirelli lived in nearby Jupiter, Florida, Performance Director Alex Magleby recognized the potential for a collaborative opportunity and the idea for hosting a camp for the squad was formed. Magleby called Pirelli and requested he put his vast rugby relationships to work. Ultimately, Pirelli was able to strike a partnership with the Jupiter Sharks, who graciously hosted the team on their newly-built rugby field.

“As co-founder of the Golden Eagles (with Magleby), I did not think it was right to send our boys to Uruguay with no chance to practice together as a team, so I agreed to fund and organize their camp,” says Pirelli.

In addition to the much-needed benefit of practicing together as a squad, the Selects players, coaches and staff also had the added opportunity to promote USA Rugby within the Jupiter and surrounding South-Florida communities. The team held a meet-and-greet, a demonstration practice and a hands-on rugby clinic for the public and Florida Youth Rugby players in addition to promoting the sport through interviews with local media.

“Simply put, without the support of Tom Pirelli and Florida Youth Rugby, our ability to compete in the APC – which garnered much needed competition for our emerging players – would not have been possible. The opportunity to develop these players (and coaches) in a high-performance camp for a few days was a vital step to preparing these future Eagle stars. Beyond that, to be able to share this passing on of information not just to our emerging players but the growing youth player and coaching community in Florida is an efficient model to help accelerate the growth and quality of the game in the US. It is a model that we should be looking to replicate. We are very grateful to Golden Eagle co-founder, Tom Pirelli, and Florida Youth Rugby for making this a reality.”

Of course, the camp also allowed for the team to enjoy some fun together before the competition. Craig Fallon, a New York Athletic Club alumnus who lives near Jupiter, sponsored a special dinner for the team to wrap up the camp. The squad also spent some time on the beach and in the pool. “The funniest moment of the tour was when I thought I would play a trick on the boys by bringing out a huge, eight-foot diameter beach ball instead of a traditional volleyball for the water volleyball tournament in my pool. The joke was on me as the boys loved it and played several matches with it, making for some funny moments,” says Pirelli.

After a busy four days with the 37 players, Pirelli is more excited than ever about the outlook of rugby in the United States. He encourages others within the rugby community to consider sponsoring similar engagement and development events within their own communities. “Although it was a lot of work, I thoroughly enjoyed the experience and I think a lot of veteran ruggers would feel the same way,” says Pirelli.

Tom Pirelli recognized that the USA Rugby Selects team was in need and stepped in to make an impact. You too can support players in the High Performance pathway by making a gift to USA Rugby Trust.

To make an even greater impact, consider becoming a Golden Eagle like Tom! Golden Eagles partner with USA Rugby Trust and USA Rugby High Performance teams to provide the financial support needed to identify, foster and develop the most talented athletes at all ages in the country. Golden Eagles make a five-year pledge of cash, stock or other IRS-approved giving methods. If you are interested in becoming a Golden Eagle, please contact Executive Director Nikki Wiederaenders.