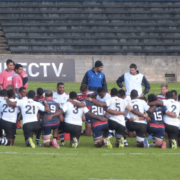 LAFAYETTE, Colo. – The Americas Pacific Challenge is just under a month away, and a roster has been set for the tournament held in Montevideo, Uruguay. Men’s USA Rugby Selects Head Coach Scott Lawrence confirmed today that 27 promising prospects will gather in Fort Lauderdale prior to competition in South America, with 10 home reserves available here in the States. With world class training and tournament play on the team’s pallet, Lawrence looks forward to appraising the young talent.

“The APC and this USA Selects is an opportunity for some of our domestic men’s athletes to put their hand up for November and beyond.” Said Lawrence. Referring to late fall test matches between Germany and Georgia for the Senior Men’s National Team, General Manager Dave Hodges recognizes the APC as an important stepping stone. “Coach Lawrence and his staff have been meticulously preparing for this competition in order to allow the players to put in their best performance.” Shared Hodges, “We look forward to seeing the team come together and represent the United States of America in this A level competition.”

Six rostered players and one home reserve will return to the APC squad after competing in the 2016 tournament. Alex Maughan, Benjamin Cima, Bryce Campbell, Hanco Germishuys, Jean-Paul Eloff and Matthew Jensen will travel to Montevideo while returning Chance Wengleski will roster as a home reserve. The United States finished with a 1-2 record following 2016 play.

“With the concurrent 7s assemblies and pros working abroad,” continued Lawrence, “we now have the ability to facilitate a greater number of athletes getting into international competition.”

The Americas Pacific Challenge is structured in a round robin, first past the post tournament format played across three competitive rounds. Teams will play opponents in their opposite pool once, with the tournament winner determined by the total number of competition points accrued across the three rounds. No caps however are awarded during the tournament as the competition is developmental and the teams participating are not the senior squads. The Men’s USA Selects will kick off play against Samoa A on October 7th.

With such a broad pool of talented young rugby players now competing in the US, Lawrence admires the support and insight provided rugby leadership, “I’m grateful to the club and college coaches who took the time and continue to engage with the entire staff in the selection and preparation process so far.”