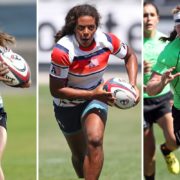 LAFAYETTE, Colo. – The Women’s bracket at the 2016 USA Rugby Emirates Airline Club 7s National Championships witnessed some of the most skilled rugby of any previous Club 7s event to date.

The incredible athleticism on display makes it difficult to single out the tournament’s very best players, but a panel of former Men’s and Women’s Eagles who commentated the broadcast of the Aug. 13-14 Championships have selected 12 players who stood out the most among a crowd of 192 athletes to be recognized as part of the 2016 Club 7s Women’s Dream Team.

Blythe might not be the player who intimidates opposition just by stepping off the team bus, but the diminutive flyer puts plenty of fear into opponents when she steps onto the pitch. After scoring only one try at the 2015 Club 7s Nationals, Blythe backed her speed to four scores over the Championship weekend – including a double against Women’s Premier League rival Glendale Raptors in pool play.

The Surfers winger also handled a lot of the team’s kicking duties at Nationals, collecting 18 points from her boot.

Braaten brought fresh legs to Denver even after starting in two of the Eagles three test matches at the Women’s Rugby Super Series in Salt Lake City. Braaten’s pace frequently put her past defenders, but it was the Twin Cities Amazons fly half’s vision that led to line breaks for her teammates – including Kaelene Lundstrum.

Another Amazon in the Youngbloodz squad, Lundstrum couldn’t match her five-try total from the 2015 Championships but was still very dangerous, scoring the team’s only two tries against American Rugby Pro Training Center in pool play.

The Youngbloodz weren’t able to advance out of a brutally tough Pool A, but Braaten and Lundstrum’s play was key to the Midwest select side’s three consecutive wins to close the tournament, including a 14-12 win over the Glendale Raptors in the Bowl Final.

Old Blue was stacked with some of the best young talent on the East Coast, and Buonopane was one of them. The Beantown center is coming off a 15s season in which she found the try zone a dozen times, and more recently started for the AIG Women’s Collegiate All-Americans against the Maple Leafs.

Buonopane began Championships strong by dotting down twice in Old Blue’s opener against the Youngbloodz, and she carried that level of form throughout the weekend. In the Cup Quarterfinals against the Seattle Saracens, Buonopane scored one of the tries of the tournament when she viciously fended off a Sarrie before finishing the phase with a score that brought fans inside the stadium at Dick’s Sporting Good Park to a roar.

Gustaitis is the first of three Sirens on the Dream Team, and with Kimber Rozier left off the list there could have easily been four. Gustaitis is a matchup nightmare. At six-feet tall, stronger than most everyone else on the pitch and deceptively quick, Gustaitis can make scoring tries look easy.

The one-time Northern Virginia player was surprisingly missing from the stat sheet in Scion’s 38-0 win over Old Blue in the Cup Final, but played a huge part in getting the National Development Academy into the title match. In the Quarterfinals against the Berkeley All Blues and Semifinals against American Rugby Pro, Gustaitis punished defenders on her way to three combined tries.

No team reaches the Cup Semifinals at Club 7s Nationals without stellar play throughout its lineup – and that’s what Oregon Sports Union received from its roster. Still, it was hard not to notice Johnson standout from the crowd.

Johnson scored in all of ORSU’s matches but two, included doubles against Old Blue and the Tempe Ninjas. Prior to the team’s defeat to American Rugby Pro in the third-place match, ORSU’s only losses came against Old Blue and Scion – the two Cup Finalists – by a combined eight points, and the team’s captain in 15s was a major part of that.

Scion’s not-so-secret weapon was lighting the pitch on fire at Club 7s Nationals. Morgan earned her first caps earlier in the summer playing with the Eagles at the Women’s Rugby Super Series, and her newly gained international experience has only made the flyer more confident.

With Abby Gustaitis and Sam Pankey gobbling-up multiple tacklers with over carry of the ball, Morgan found plenty of room to run on the edges. And when the Morgan had defenders in front of her, the 2016 Club 7s Women’s MVP typically ran around them anyway.

Every good sevens team has a quality enforcer. Pankey is not only the enforcer that produces go-forward ball, but much more. After being held without a try in Scion’s first two matches, the one-time loose forward turned Eagle hooker bullied her way to seven tries in the Sirens final four games, including a double in the Cup Final against Old Blue.

After a disappointing performance – to their standards – at the 2015 Club 7s Nationals, the Sirens didn’t want to settle for anything other than a National Championship this summer. Pankey exemplified Scion’s passion to bring a title back to Washington, D.C.

The capped Eagles Sevens player left Denver with seven tries to her name; three of which came in a hat trick performance against the Youngbloodz. With half the ARPTC’s roster being made-up of players 23 years old or younger, Perry’s leadership was just as valuable as her production.

Boston only won two matches before falling in the Shield Final against the Chicago Griffins. Still, that’s two more wins than Boston earned at the 2015 Club 7s National Championships, and Singletary was a big reason why.

The Northeast Academy athlete added a punch to Boston’s attack. Singletary scored two tries against the Tempe Ninjas, and her double against Northern Virginia led to a near upset of NOVA.

Give Stockert an inch, and you’re likely to get burned. After being the most dangerous ball-runner at the 2015 Club 7s Nationals, Stockert was up to her old tricks again this summer.

Being an Eagle, everyone in the Club 7s field knew how important it is to try and contain Stockert. That’s why it’s been beneficial for the Saracens that Stockert has mastered the ability to set-up her would-be tackler before rounding the corner for another one of her typically long try-scoring runs.

The Griffins weren’t able to earn a victory during pool play, but the Midwest’s No. 1 seed closed its first appearance at Club 7s Nationals with two wins, including one in the Bowl Final. The Griffins ability to return to Chicago with hardware was in large part because of Trout’s array of skills.

The Chicago North Shore fly half’s long frame draws a lot of attention from the defense, making Trout lethal at putting teammates into gaps. When she wasn’t busy scoring on of her four tries on the weekend, Trout was often creating space for teammates like Brittany Biedenbender (five tries).

A fixture is the Eagles XVs backline, Wooden is also a terrific sevens player. Wooden was statistically better at the 2016 Club 7s Nationals as compared to last summer’s Championship-winning run, and the full back has increased her role as a leader.

After a disappointed, 12-7, loss to the Scion Sirens in the Cup Semifinals, it was Wooden who rallied the troops to a third-place finish by scoring two first half tries in a comprehensive, 24-0, win over Oregon Sports Union.