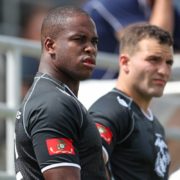 This August, the All-Marine Sevens rugby team took the field during the RugbyTown 7s at Infinity Park in a clash with some of the top rugby talent from around the world. The group fought fiercely in the featured Armed Forces Pool A, squaring up against the other military branches. Through rugby, the Marines fought together on a new sort of battlefield.

In 2012, RugbyTown 7s started as a tournament focused on armed forces rugby teams and has grown to include competitive clubs from all around the world. The Marines won the U.S. Armed Forces Championship in 2012 and with a young group this year, looked to find the podium once again. With global rugby stars and former Olympians included on opposing rosters, this unique tournament presented a battle at the highest level, unlike any the All-Marine team had faced before.

Collectively, the roster consisted of nearly 100+ years in USMC experience and nearly the same in years on the rugby pitch. Ranging from the rank of Lance Corporal to Lieutenant Colonel and occupation of Support Technician to Countermeasures Officer, the spectrum of team diversity was broad.

While the squad missed out on another Armed Forces crown, they finished the weekend with a loud 42-7 defeat over the North America Tsunami Sport Barbarians in the Bowl Quarterfinals. Advancing to the Shield Semifinals, they narrowly lost to the Washington Athletic Club.

When asked how being a Marine makes him a better rugby player, team captain Sgt. Timoci Kawa explained, “First of all, team bonding. Working together, completing goals and taking care of the mission, with your brothers, every day.”

Sgt. Kawa started playing rugby at six years old in his native Fiji. While he has been playing the game for almost thirty years, five of those have been with the All-Marine team during his seven years of service as an active duty Marine.

The whole team felt the pride of being Marines and a rugby players through the weekend. When asked the same question as his captain, Lance Cpl. Chris Autagavaia noted, “As Marines, we have this warrior fighting spirit and when it comes to rugby, it’s very much the same thing.”

A warrior fighting spirit is what makes Marines and rugby players so unique and drives their desire to persevere through any situation. It’s a sentiment repeated in rugby may times, but as Marines, these special athletes have a rare understanding for just how resilient a person can be against opposition. Autagavaia continued, “We have this famous phrase in the Marine Corps: adapt and overcome. With rugby it’s the same thing. We study our opponents and then overcome those problems and difficulties.”

The well-recognized motto for the Marines is “Semper Fidelis” meaning always faithful. While the tournament ended earlier than hoped for these Marines, they kept this mentality engrained in them and stayed faithful from whistle to whistle. With another valuable year under their belts, the battle-tested squad will return with a fighting spirit in 2019.