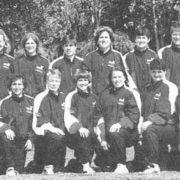 The 1998 Women’s Rugby World Cup served as a sort-of changing of the guard; New Zealand returned to the international stage to dethrone the USA Eagles and England, while the International Rugby Board (now World Rugby, the international governing body for the sport) had sanctioned the tournament as the first “official” world championship for the women’s game. Sixteen teams had also competed in ’98 – matching the number of competing nations in the men’s tournament – compared to the four pools of three teams in 1991 and 1994.

The growth of the women’s game had been reported worldwide. On top of nations included in the World Cup for the first time, the tournament in Holland drew record crowds. There was a worry, however, that the gap between some of the more successful rugby nations had grown too much in respect to some of the “minnows” of the game.

While teams like Canada and Kazakhstan improved between 1994 and 1998 and ’02 host Spain challenged the likes of Australia and beat Wales, the margins of victory of several World Cup games begged the question: was the standard of play across the board competitive enough for a 16-team tournament?

“We looked at where we were four years ago and there has been a 100-percent improvement,” a Canadian member of the IRB’s women’s advisory committee commented at the time regarding the 1998 World Cup.

As much as the Eagles had blown through the majority of their matches at the World Cups, New Zealand had made mincemeat of its five opponents in the Netherlands – the U.S. included, and in the Final. Fourteen of 40 games throughout the two weeks had been decided by 40 points or more, and just 12 had a margin of victory of two converted tries or fewer.

Hoping to further the spread of the game and reward a nation that had participated in each of the previous World Cups, the IRB awarded the ’02 tournament to Spain following a bidding process. With the dropping of underperforming Russia and Sweden, Japan was set to return to the expanded competition after an absence in ’98, beating Hong Kong in the only “qualifier,” while the first Oceania team in the tournament, Samoa, was given a spot in one of the four pools.