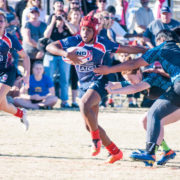 The Las Vegas Invitational was the first time a Girls High School All American team played together, can you give us a quick recap of how the LVI went for the two GHSAA teams?

What were your goals for the weekend, and were they met?

What was the response from the general rugby community to having these girls play together for the first time?

Is there anything you’d like to add about your coaching staff?

What’s next for the GHSSA program?