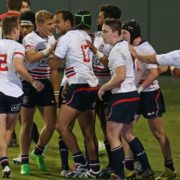 LAFAYETTE, Colo. – The high performance schedule for the AIG Men’s Junior All-Americans‘ upcoming year has been announced, aimed towards sending the under-20 national team to the 2017 World Rugby U20 Trophy in Uruguay next August and September.

MJAA Head Coach JD Stephenson and his staff will assess new and returning talent at three evaluation camps spread across the United States in December before team selections are to be narrowed down at developmental camps in the first two months of the new year. The touring squad will then head north of the border for a qualification match against its Canadian counterpart in June in hopes of booking a ticket to the U20 Trophy.

“We narrowly returned to the U20 Trophy after missing out on qualification in 2015 and fully understand the importance to continue to take steps forward in terms of our talent identification, evaluation, and development processes,” Stephenson said. “This competitive cycle, we’re excited about being able to offer America’s young talent opportunities to assemble with the national team without having to miss schooling or conference play with their respective programs.”

Coaches with high school, club, and collegiate programs are urged to nominate players born January 1st, 1997 or later, for All-American camp selection. The high performance staff recognizes the need to receive input from the community as it is difficult to view every eligible athlete throughout the competitive season.

Scheduled for three separate weekends in December, evaluation camps consisting of 60 athletes apiece will be held in Atlanta (East), Phoenix (Central), and San Francisco (West). Though only a percentage of players will continue through to the developmental camps at the Olympic Training Center in southern California and in Austin, all athletes will receive feedback from the high performance staff and be included in future national team considerations. In addition, the high-level assemblies will benefit individual growth to help strengthen the home programs.

The MJAAs defeated Canada’s under-20s in the one-off qualification match at Dell Diamond in Texas in February prior to their fifth-place campaign at the U20 Trophy in Zimbabwe, where the eight teams in the competition trialed several experimental law variations. Stephenson’s squad’s two losses were by a combined four points under a variant scoring system of six points for tries and two points for all kicks.

To nominate a player please use the following link: MJAA Evaluation Camp Nomination