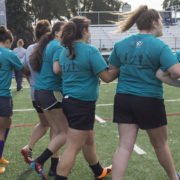 The third season of World Rugby’s Women’s Sevens Series is alive and well and headed to Atlanta, where the host city of the Games of the XXVI Olympiad readies for 12 of the best international women’s rugby sevens teams.

Three years ago, between eight and 12 teams competed in the Challenge Cup – a tournament set up by the governing body two years after rugby sevens was added to the Games Program – to give the women’s teams meaningful international competition throughout the year.

As tournaments in Dubai, Hong Kong, and London attracted growing crowds alongside the men’s event, the Women’s Sevens Series was created for the 2012-13 season. Twelve countries were placed in three pools at each of the four inaugural stops, including Houston, while fans around the world were able to watch every minute of action with a free online stream provided by World Rugby.

With Women’s Rugby World Cup 2014 breaking broadcast records for women’s rugby – up to 289 million homes received 306 hours of broadcast footage – and the game receiving more recognition in countries which may not have had an original women’s squad in either code, World Rugby’s efforts to spread the game to youth in many regions has been boosted by the success of the women’s game.

World Rugby reported participation in the women’s game grew by 270,000 in the last calendar year, with the total number of female rugby players now at 1.77 million.

England’s World Cup victory in Paris was followed by a £600,000 grant from the English government to Premiership Rugby to “spearhead . . . [an] initiative to increase the number of women and girls . . . who participate in rugby union,” while the Rugby Football Union centralized 20 female athletes and hopes to add another 10,000 women playing rugby for a total of 25,000 by the next World Cup in 2017.

World Rugby grants awarded to each of the 16 unions with teams participating in the 2014 World Cup have also helped the creation of new initiatives, including USA Rugby’s Stay in the Game program.

Led by former Eagle and USA Rugby Associate Collegiate Director Tam Breckenridge, Stay in the Game continues on from the introductory work of Rookie Rugby and Try On Rugby by bringing young athletes together with coaches and national team players to show the possibilities of staying with rugby through college.

“Participation in the sport has increased significantly, the U.S. has hosted many high level men’s and women’s tournaments, rugby is getting some television coverage on major networks, and, with the 2016 Olympics coming up, we will only gain more exposure for our sport,” Women’s Eagle Katy Augustyn said.

Augustyn was one of several current Eagles helping out with the Stay in the Game pilot activity at Cal Maritime Academy in Vallejo, Calif., in January. More than 30 young women attended the program, during which they were assembled into groups and put through drills with local college and club coaches. Each group was also given a mentor-player from a local college or club, with Eagles also filling in with a few groups.

Augustyn, Breckenridge, Lisa Butts, Jessica Davis, Nancy Fitz, Tara Flanagan, Naima Reddick, and Mari Wallace represented the initial class of Eagles working with the Stay in the Game program, which also aims to give young women role models to whom they can look up as they think about career aspirations. The Eagles, who finished sixth at the World Cup and boast some of the world’s top female talent in sevens and 15s, are no strangers to the ambassadorial role.

“The Women’s Eagles try to hold themselves to a higher standard which, during the last cycle, we referred to as the ‘Eagle Way,'” Augustyn said. “I think Jamie Burke did a great job of explaining this at the National Development Summit in Chicago when she said, ‘It means you are making deliberate choices 365 days a year.’ She went on to say that, although we are not professional athletes, the expectations we have set for ourselves and our teammates ‘have become professional.’

“This includes many of the things people would expect from professional athletes – such as practice, weight training, nutrition, rehab – but it also means being ambassadors for the game and role models for younger players.”

Stay in the Game‘s specific goals, broken down by age and participation level, are:

High School Player
– to encourage participation with new players and different coaches, highlight the different pathways (player and non-player roles), and provide female leaders and role models
College/Club Player
– opportunity to serve as a mentor while also learning more about pathways and opportunities outside of playing
Coaches/Officers
– opportunity to build a network, open communication, and work together to share ideas, thoughts about regional growth and development for players/teams and coaches, officers, referees

The restructured Women’s Eagles pathway provides for even more opportunities to be seen by and work with national team coaches at any level. Programs like Rookie Rugby, Stay in the Game, and Try On Rugby can help young athletes learn the values of the respectful game of rugby while participating at multiple entry points.

“For me, the Stay in the Game program is about community,” Augustyn said. “The event at Cal Maritime was a melting pot of new and old coming together to enjoy the sport they love for an afternoon. It was really fun to jump in the drills and play with these new players who were all so excited to learn.

“The Q&A session was great, too; it showed the girls where they could go with their rugby careers. I think a lot of girls don’t realize that there are opportunities to play after college. Whether it be playing socially for a club side, refereeing, coaching, or continuing on the High Performance Pathway for sevens and/or 15s, there is really something out there for everybody.

“The program also gives those who might be ready to hang up their boots some options to stay in the game. The knowledge seasoned players have is something that should be shared. Coaching and refereeing are both great ways to share that knowledge and give back to the game.”

Stay in the Game is also part of USA Rugby’s larger Recruit and Retain program, which is in its early stages with a partnership with Sport Development Concepts LLC. A study of a portion of USA Rugby members conducted by the Westminster, Colo., firm will determine the factors causing players to remain in the sport as well as those resulting in players leaving the sport.

The second Stay in the Game program will be held in the morning Saturday, March 14, on the warm-up field outside of Fifth Third Bank Stadium at Kennesaw State University, which will hold the pool matches of Atlanta 7s later in the afternoon. The program is free to all, though registration is required. Visit the Stay in the Game homepage for more information and the Atlanta 7s event page for tickets and directions to the third leg of the 2014-15 World Rugby Women’s Sevens Series.