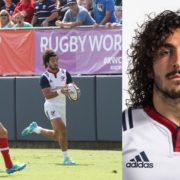 Passionate about rugby from the early stages of his life, Ryan Matyas has successfully worked his way through USA Rugby’s high performance pipeline, playing with the AIG Men’s Junior and Collegiate All-Americans before capping for both the Men’s 7s and XVs. Learn more about the standout elite athlete!

USA Rugby Trust:When and where did you play rugby?
Ryan Matyas:I started playing rugby when I was 12 in my home town Tucson, Arizona, in 2003 for the Tucson U19 Barbarians. I played there until 2011 when I moved to the U.K. and played a season for Tondu RFC in Bridgend, Wales. In 2013 I played for the University of Arizona and the Collegiate All-Americans 7s. Since then I have played for New York Old Blue, Tucscon Magpies, Tempe Old Devils, North East ODA, East Coast Bays RFC in Auckland, New Zealand, North Harbour and San Diego PRO Rugby.

USART: What is your favorite rugby memory?
RM: It’s a tie between playing in the Hong Kong Sevens, and beating Canada in the Rugby World Cup Qualifier this summer.

USART: Where are you now?
RM: I am currently back at the Chula Vista Elite Athlete Training Center with the 7s team prepping for Silicon Valley Sevens and Dubai/Cape Town.

USART: What do you believe is the most important factor in growing the sport of rugby in the US?
RM: I know there are tons of current and ex-players devoting a lot of time and money to develop the game in their own communities, which is massive and a great start. Programs like the High School All-Americans and Eagle Impact Rugby Academy (E.I.R.A) give athletes (14-18) high level training with other high caliber athletes, higher level coaching, nutritional and sports conditioning information, not to mention a taste of international rugby. But I believe for the ball to really get rolling it’s a combination of proper sponsorship of youth rugby academies and getting rugby to be a widely-accepted varsity sport in high schools and colleges. I understand there are a few colleges that offer partial scholarships to rugby players, but once we can get major universities to offer full scholarships, parents will stop pushing their children to play other sports such as football and basketball in high school.