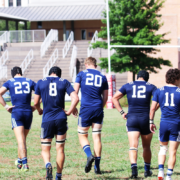 GLENDALE, CO. – USA Rugby is excited to reveal the names of 83 of the nation’s top student-athletes who have been chosen to participate in the upcoming Men’s Collegiate All-American (MCAA) Selection Camp. Taking place August 9-17 at Infinity Park — home of the Glendale Raptors of Major League Rugby — the first four days will include a mixture of training and trial games; after which 30 athletes will stay on to work directly with the Men’s Collegiate All-American staff.

The camp will conclude with a match against the Glendale Raptors on August 17; after which USA Rugby will name the 1st, 2nd and 3rd Team All-Americans. 1st Team All-Americans will be announced LIVE on facebook.com/usarugby.

“Our coaching staff is thrilled to have the opportunity to work with the top collegiate players in the country,” said James Willocks, Head Coach of the Men’s Collegiate All-Americans. “It is always a challenge to identify the top players with the college game being so expansive. We believe that we have selected a wide squad of players available, with representation across most conferences, divisions and programs throughout the country.”

Of all the players invited, the 83 available to attend span a variety of different conferences. D1A programs hold the strongest representation with 60 candidates that include the Mid South (24), Rugby East (8), PAC (8) and five independent institutions in the mix. Eight athletes come from D1AA programs with D2 (7) and NSCRO (6) rounding out the bunch. All athletes will be considered for All-American honors.

The selection camp will be covered across USA Rugby’s digital and social media platforms with admission to see the Men’s Collegiate All-Americans face the Glendale Raptors at Infinity Park free to the public.