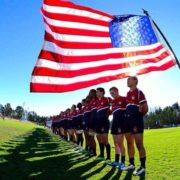 LAFAYETTE, CO. – The USA Rugby Boys High School All-Americans are gearing up for the annual Winter Camp to be held at Casa Grande Sports World in Arizona from December 27th through December 31st of 2017.  Held during the school calendar winter break, the event is used to develop, evaluate and test the best boys high school players in the country along with the next generation. This year’s camp is the largest in years with 184 athletes, 33 coaches, trainers and other staff; including appearances by Men’s Eagles’ Ryan Matyas and Brett Thompson.

Camp, which is split into Varsity (1999s and 2000s) and Junior Varsity (2001s, 2002-03s) teams, will feature Rugby Canada’s U18 squad of 50 players and coaches, providing an element of international play that furthers the development of the players. Boys HSAA Head Coach Salty Thompson shares the same philosophy as Rugby Canada U18 Head Coach Mike Curran, applauding Curran’s participation in the program.

“I want to thank Mike Curran and Rugby Canada for joining us in camp,” said Thompson. “The collaboration between us has been great and we both share the desire to improve and test ourselves.”

The Boys High School All-American varsity squad will play a four game series against Canada, with two games on December 28th (2 PM and 3:30 PM MST); along with two matches on December 31st with early starts (8:30 AM and 10 AM MST).

While playing Canada adds a bonus to camp, the focus will still remain on prioritizing individual player advancement as opposed to only highlighting team performance. Though arriving late on the first day (Dec. 27) and playing the following afternoon may present competitive challenges, the opportunity to sample international competition is tremendously exciting for those involved.

The Junior Varsity U16 and U17 teams will train to develop core skills, units and teams to play inter-squad games with the overall goal of providing a valuable and fully-engaging learning experience.

Head Coach Salty Thompson understands how this dynamic is especially important to his athletes and their future progression in the rugby world.

“The earlier the boys are introduced to a high performance environment the better,” says Thompson. “It gives them a taste of the lifestyle and standards needed to excel at a competitive level.”