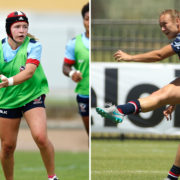 WJAA Head Coach Wil Snape and staff are preparing for a 2017 competition year as the Women’s Eagles build towards the eighth Women’s Rugby World Cup. The AIG Women’s Collegiate All-Americans competed in 2016, and will have its eligible athletes available at the senior NASC.

“We’ll be working with players on defining a shared vocabulary and establishing that vocabulary with how we want to play together,” Snape said. “The NASC is a real opportunity for players who are going to stake their claim and show what they’re all about.”

While a few All-American alumni still eligible for the under-20 national team were unavailable for the NASC, there is a group of returning WJAAs from the 2015 sweep of Canada – the team’s most recent set of matches. McKenzie Hawkins and Kat Ramage were selected for this year’s WCAA team in Salt Lake City a year after playing in the Under-20 Can-Am Series powered by Atavus, with Sheila Decker also a member of the 2015 team that won both matches against its border rival counterparts at Central Washington University.

The WJAAs are an integral cog in the National Team Pathway, serving as a mid-point between the Girls High School All-Americans powered by Atavus (under-18) and the WCAAs (under-23) and senior teams. In a competition year, the goal for Snape and Co. is to identify those athletes that project to a future of rugby on the international stage.

“They’re there because of what they do well,” Snape said of the NASC attendees. “But they know they have a pathway to go on. Giving these players an understanding of what it takes to be an international rugby player is a core outcome of this assembly.”

Similar to the senior assembly, which begins Thursday, Dec. 29, the camp roster will be split into teams for match days Dec. 28 and Dec. 31. The timeline of the NASC will replicate an international tour, featuring short rest periods between matches and only a few practice sessions prior to kickoff.

In addition to Snape’s coaching staff, several pathway coaches will also take part in leading the WJAA NASC. Ricardo Ramirez, recently named Big 10 Coach of the Year in taking Notre Dame University to the conference’s title match, will gain experience with the under-20s having assisted the GHSAAs in the past two years.

Additionally, the proximity to the senior NASC allows for an up-close look at the requirements of international athletes. Interacting with capped Eagles and on-the-cusp selections, athletes that were in the same position as the WJAA hopefuls in the not-too-distant past, will help to ground the younger players and solidify their aspirations.

“Whenever the pathway gets together, it’s always valuable,” Snape said. “It becomes a real thing for the athletes we’re working with rather than just something they dream of. It becomes a reality when they see people that were once where they are actually achieving it.

“It’s also valuable being around those players and seeing how they conduct themselves. The older players are also good about interacting with our group and answering questions for them.”

The WJAAs’ 2017 calendar will be finalized in the early part of the new year.