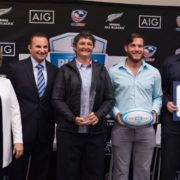 In an unprecedented and exciting new program, SoCal Youth Rugby has led the way for safety and player welfare with its new ‘Player Welfare Program.’

With new requirements around health and safety of youth athletes being implemented across the country, Alexandra Williams, executive director of Southern California Youth Rugby (SCYR), saw an opportunity for the athletes of her organization. She created a full suite of programs designed to track and ensure trainer coverage at all youth matches, from injuries sustained in competition to return-to-play compliance.

Beginning just its second season, the program is already receiving huge accolades. SCYR was named the National Council for Youth Sports (NCYS) STRIVE Award sponsored by AIG for Organization of the Year Thursday, Nov. 3, at AIG’s headquarters in Chicago. The award was presented by both AIG and NCYS executives, highlighting the organization’s commitment to safety in youth sports. S.T.R.I.V.E. stands for “Sports Teach Respect, Initiative, Values and Excellence.”

NCYS president Sally Johnson awarded Williams with the award, saying, “Today we are honoring this organization of the year for their exceptional commitment to responsible health, wellness, safety, and injury prevention in sport.”

Wyatt Blue manages the daily ins and outs of the program directly. An experienced athletic trainer and administrator, Blue well understands the importance of safety in youth matches. The suite of programs and benefits starts with the opportunity for every registered player to take the ImPACT–baseline concussion training–and includes the scheduling of an athletic trainer at every contact rugby match. From there, the trainers and coaches can notify SCYR–through a mobile portal provided by InjureFree–about suspected concussions or other injuries sustained. When suspected concussions and major injuries occur, Blue follows up directly with parents and coaches.

He said the program is a hit with parents.

“When they hear about it they are very excited about what we’re doing, because it’s all about the safety of their athletes, which is very important to them,” Blue said.

In year two, Williams is looking to implement a component where coaches can add injury notes from practice sessions in addition to competition, to incorporate the concussion education recently mandated by the State of California, and to produce injury prevention and training resources for coaches based on analysis of the youth rugby injury data being collected.

Williams first applied for the award back in April. The process involved an initial screening hurdle, creating a video, internet voting, and, finally, being awarded a $5,000 prize to help support the Player Welfare Program.

In addition to the NCYS STRIVE Award sponsored by AIG, SCYR also received a USA Rugby grant to kick-start the program, and receives additional support through partners that generously support the Player Welfare Program, including: Brock International, The Ruggers Edge, and Fruzinga.

Southern California Youth Rugby (SCYR, Inc.) is the organizing body responsible for all youth and high school rugby in Southern California, serving over 100 Clubs and high school programs and more than 5,000 athletes aged U8 to U18. SCYR administers multiple leagues throughout the year and focuses on safety, growing the game, and sharing the unique and wonderful culture of rugby.