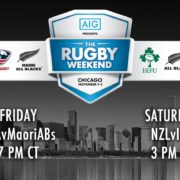 CHICAGO – With just over one month to go until “The Rugby Weekend Presented by AIG,” USA Rugby and TLA Worldwide announced today, September 28 they had partnered with onPeak to aggregate a selection of hotels that have incorporated discounted rates for fans visiting Chicago during the Nov. 3-6 weekend.

The USA Men’s Eagles and Tier One international rugby return to the Windy City for a third consecutive year in the form of “The Rugby Weekend Presented by AIG.” The rugby union national team of the U.S. will face the New Zealand Maori All Blacks Friday, Nov. 4, at Toyota Park before the two-time defending World Cup Champion New Zealand All Blacks take on world No. 6 Ireland at Soldier Field Saturday, Nov. 5.

More than 80,000 fans have witnessed international rugby from inside the 62,000-seat Soldier Field over the past two years as the national teams of Australia and New Zealand have made the trans-Pacific journey to play against America’s Eagles.

onPeak, a leading provider of hotel accommodations for events, tradeshows, and conventions, has aligned 13 hotels that have availability during “The Rugby Weekend Presented by AIG,” Each of the 13 hotels are situated within two-and-a-half miles of Soldier Field, and all but one are located on the east side of Chicago River.

“onPeak is delighted to partner with USA Rugby on what will be an outstanding weekend of rugby,” onPeak Vice President of Sales & Marketing Barry McDonald said. “We look forward to working with all the fans, especially the Kiwi and Irish fans who are traveling in for this exciting match. Since I am from Dublin and Michael Howe (EVP onPeak) is from New Zealand, it’s been a lot fun working on this historic rugby weekend.”

The average daily rates for the litany of hotels listed on onPeak’s easy-to-use website range from $119 to $476. As the event nears, deals like these – with hotels such as the Sheraton Grand Chicago, The Palmer House Hilton, Hyatt Regency Chicago, and W Chicago – City Center – will not be found elsewhere. Plus, onPeak offers flexible reservation policies for adjustable planning. To view hotel options and book, visit – https://compass.onpeak.com/e/012604205/

The rooming blocks open to fans for the weekend will be available from Thursday, Nov. 3, the night of USA Rugby Trust’s Chicago Gala at Macy’s on State Street. For those interested in supporting rugby in the United States and spending a once-in-a-lifetime evening with members of the elite rugby community, plates at USA Rugby Trust’s Chicago Gala start at $250 per person. Featuring a panel discussion with former international players, the Gala will include dinner, a silent and live auction, and a VIP cocktail reception. All funds raised from the Chicago Gala will benefit USA Rugby Trust, furthering its mission to support, promote, develop, and grow the sport of rugby at all levels in the United States by providing financial support to USA Rugby. More information on the Chicago Gala can be found on the USA Rugby website. Potential sponsorship inquiries can be directed to Event and Donor Relations Manager Jessica Welsh (jwelsh@usa.rugby).

In addition to The Rugby Weekend’s presenting sponsor, AIG, which is a proud partner of New Zealand Rugby and USA Rugby, Tokyo-based Astellas Pharma, whose headquarters for the Americas is located just outside of Chicago, has signed on as Official Healthcare Partner for the event for the third year in a row. Citi has also been confirmed as a sponsor for the weekend.

Along with the weekend partners, Guinness and McDonald’s are sponsoring the New Zealand v. Ireland match, and USA Rugby Union lead sponsor Emirates will be an official sponsor of USA v. Maori All Blacks.

Tickets for “The Rugby Weekend Presented by AIG” are on sale via Ticketmaster, though there are only limited quantities remaining for both matches. Friday night’s match under the lights at Toyota Park is scheduled to kick off at 7 p.m. CT, with an afternoon kickoff of 3 p.m. CT scheduled for Saturday’s international test at Soldier Field. Broadcast information for the weekend will be announced in the coming weeks.