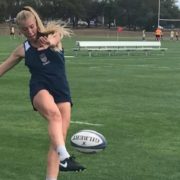 ORLANDO, Fla. – The Girls High School All-Americans powered by Atavus are in Florida this weekend for the inaugural Tropical 7s tournament at Omni Orlando Resort at Championsgate.

The Easter weekend tournament is the first competition of the year for the GHSAAs, who have been quite successful on the international scene since their inception. In 12 sevens matches and four XVs matches in 2016, Farrah Douglas’ under-18 team lost just one 14-minute game. The GHSAAs are joined in Orlando by a Canadian under-18 squad in addition to four local sides.

“As we look to return to Vichy, France, for the European 7s Championships and begin to think about the preparation for the 2018 Youth Olympic Games, we see this tournament as a development opportunity,” Douglas said. “We have selected some of our younger players from the France series, such as team captains Julia Riekena and Cassidy Bargell, to challenge them in becoming strong team leaders and push their understanding around how we want to strategically play sevens.

“We also see this event as an opportunity to provide some of the newer players to our sevens program experience within our system of play to prepare them for potential selection for France.”

The GHSAAs will play three matches Friday, April 14, before finishing round-robin play Saturday, April 15. The six teams in the under-18 competition will then be seeded based on results for one-off knockouts, consisting of two consolation matches and one championship final.

The new tournament will see a further 19 teams competing in the divisions of University Men, University Women, U-18 Boys, and U-16 Boys. More information can be found on the Tropical 7s website and Facebook page.

“As we look to continue to expand the game for young women, having our youngest age-grade team play domestically is fantastic,” Douglas said. “It allows our parents to come out and support the team, and of course there is something intangible about putting on the USA jersey and playing at home. The team is excited to be here and are ready to begin the journey to return to the final in Vichy and, ultimately, medal in 2018.

“We have collaborated with the tournament director and Canada to use the tournament as a preparatory event for the European 7s Championship in September, in addition to growing the tournament and providing legitimacy to those working hard in Florida to develop and grow the high school girl’s game.”

Plans for a summer camp are in the works for the GHSAAs ahead of a planned series with Canada. More details related to 2017 competitions will be announced at a later date.