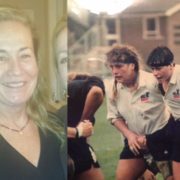 She played in three World Cup matches as a member of the 1991 USA Women’s World Cup championship team. Now Maryanne (MA) Sorensen and the ’91 Women’s Eagles will be inducted as members of the U.S. Rugby Hall of Fame Class of 2017 at the upcoming Hall of Fame Induction Dinner. Learn more about her rugby career and experiences.

USA Rugby Trust:When and where did you play rugby?
Maryanne Sorensen: I started playing rugby in 1975 at the College of William and Mary and I was hooked from the very first practice. How lucky I was that we had three very dedicated men that started the team and coached us, Jack Russell, Jim Booker and Bill Sharp. After graduating from college l moved to Philadelphia for medical school and began playing with the Philadelphia Women’s Rugby Football Club in 1978. I played with Philly regularly until 2000 when work commitments became overwhelming and I was unable to make practices or games. I did have a period from 1984 spring to1986 fall season when I played with the Bethlehem Maulie Maguires. I have had a wonderful time with my club. I have had a lifetime of great memories and feel fortunate that I was able to have such wonderful experiences. Later I was able to coach the Philly Women for several fun seasons.

USART: When did you play with the Eagles?
MS: I was first selected to the Eagles squad in 1990 and made my first appearance on the international scene at the 1991 Women’s World Cup against the USSR. I played in three World Cup matches, including that awesome final vs. England. I believe our next venue was a Can-Am in Minnesota in 1992 vs. Canada, followed by the Canada Cup in spring of 1993 in Toronto where we competed against Canada, England and Wales.

In 1994, I was on the Eagles squad that competed in Edinburgh, Scotland for the Women’s World Cup where we placed second to England. In 1996, we participated in the Canada Cup in Edmonton, Canada against Canada, France and New Zealand. On the 4th of July weekend, 1997, we played Canada in Toronto, a venue that also showcased the US Under-23s as well.

Summer 1997 I was lucky enough to go with the Eagles on a three-week tour of Australia and Fiji in preparation for the 1998 World Cup in Netherlands. The 1998 World Cup was another great adventure where we finished in second place to New Zealand, a team that had been training together for more than months! In August 1999, I played with the Eagles at Saranac Lake Can-Am tournament against Canada and then later that fall went to New Zealand to play in the Tri-Nations tournament against New Zealand and Canada.

USART: What is your favorite rugby memory?
MS: Playing in three World Cups was an incredible experience! It is still, to this day, hard to find words adequate to describe the emotions that I feel when I reflect on those tournaments. I feel privileged to have represented my country in those events and I can still remember the way my heart started to pound and how proud I felt to be standing on the field with my teammates when the Star Spangled Banner played. I felt such a sense of unity and solidarity each time we took the field – it was awesome!

It would be hard to pick out just one favorite rugby memory; I must have a million…of course winning the 1991 World Cup in Cardiff, Wales, at Cardiff Arms Park and hearing so much support from the stands, including the Welsh! Every World Cup experience is dear to my heart. I also cannot forget the great times I had with my club side at tournaments and away games; the camaraderie forged at the yearly ITT events – so many fiercely contested matches! And I would also have to mention traveling to Ireland and playing scrum half for a university team in a tournament in Cork and getting married in East Coast Bays, New Zealand, after playing tight head prop in a men’s match!

And to top it off, I am so deeply honored and amazed that there is a yearly award given to the top collegiate women’s rugby player that is named after me…I am still reeling from that!

USART: Where are you now?
MS: Currently, I am living in suburb of Philadelphia, PA, and working full time as an anesthesiologist in a very busy practice.

USART: What do you believe is the most important factor in growing the sport of rugby in the US?
MS: I think the most important factor in growing rugby in the US is the continued promotion of the game at the youth levels. That requires a lot of work and involvement from parents, volunteers and retired players. In our area there is a growth in the number of high school teams, which is fantastic. To continue promoting our sport, we have to get more media attention. I think the last Olympics helped gather attention for rugby! So many people loved it and asked me so many questions at work. The CRC 7s that play in Philly every June also helps promote rugby. I would love for 15s to get more attention as well! When people first watch a match, they are fascinated by it; they love the continuous action and the tackling, but are maybe a little intimidated because they don’t know all the rules.

I love the enthusiasm of the local high school and college teams! I hope we can keep them playing supporting local club sides after graduation. I wish everyone could experience the fun, camaraderie and affection that I have had for my teammates, club and national levels. I feel so very fortunate and I hope to be able to give back more to the sport when I can cut back my hours at work.