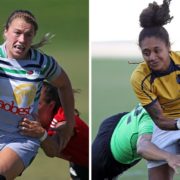 As contracts for full-time residents at the OTC are finalized, Eagles Head Coach Richie Walker has invited a handful of athletes from various clubs and colleges to train alongside his group less than two months until the Series kicks off at Emirates Airline Dubai Rugby Sevens. Jordan Gray, Molly Kinsella, and Hope Rogers – recently announced as the first women’s XVs athletes to be contracted in southern California – will only participate in open-play scrimmages during the Camp week to supplement Walker’s plans.

Team USA’s Women’s Rugby Sevens team played in the first women’s Olympic rugby event in Rio de Janeiro in August, finishing fifth out of 12 competing nations. The U.S. held eventual gold medalist Australia to a draw before dropping out of the medal rounds to the runner-up, New Zealand, by five points, instilling a sense of confidence Walker said the greater talent pool should take into the upcoming season.

“I think the biggest lesson we learned during the tournament is that we can definitely play with the top teams when we want to play,” the head coach said. “When we have confidence and we have faith in each other, that will help our players get better and better and better.”

Lauren Doyle and Alev Kelter are two of four Olympians to have already accepted their full-time spots at the OTC, while Team USA alternates Cheta Emba and Nicole Heavirland, as well as Kristen Thomas, who was injured at the final tournament of the 2015-16 Series, provide stability to incoming players to the sevens national team setup. Amongst the residents are Women’s Division II Club National Champion Megan Foster (Life West) and Division I College 7s National Champion Nicole Strasko (Life University), both of whom earned their debut XVs caps with the Women’s Eagles at the Women’s Rugby Super Series.

Young Lilly Durbin made her Series debut as a teenager in Clermont-Ferrand at the end of last season, and will look to earn a second cap from Camp with former Fallbrook High School teammate and now-Pennsylvania State University Nittany Lion Kayla Canett beside her. The two helped lead the USA Rugby Girls High School All-Americans powered by ATAVUS to a second-place finish at last month’s Rugby Europe Women’s U18 Sevens Championship.

The All-American experience is bolstered by capped Eagle Tess Feury, University of Michigan’s Alena Olsen, and Seattle Saracens’ Kelsi Stockert in the Camp roster, with Bloomsburg University’s Nicole Snyder following her selection to a National All-Star Competition with the Camp invite. With a combined 60 caps on the Series between the 22 athletes in Camp, 14 are under the age of 26, and five under the age of 23.

“We want to get the younger women out to the OTC and into our environment now and continuously so they’ll have a shot come Rugby World Cup Sevens 2018, and definitely for the Tokyo 2020 Olympics,” Walker said. “If we start having them in now, getting them excited, then hopefully they’ll want to be down here. It’s an exciting, young group and I want them to push the athletes that we have down here, and I think they can do that.”

Next week’s Camp will focus on bringing along residents and invitees alike, while the follow-up Camp in November will yield a squad of 12 to travel to the United Arab Emirates for the Dec. 1-2 Series kickoff. A wider selection of athletes is expected to attend, with Walker and staff utilizing the National Development Academies for recommendations as well as including the coaching staffs in the preparations for a greater understanding within the pathway.

As Walker stated upon his hire as head coach earlier this year, the first circuit tournament of the season is one of the hardest, whether it is an Olympic year or otherwise. As programs reset or reevaluate with new goals in mind, Dubai will offer an initial feeling-out process for the 12 nations involved.

“It’s the first tournament back; a lot of teams have been changing coaches and a lot of teams will be changing styles – except for Australia,” Walker said of the first leg of the planned six-tournament Series. “They won’t have to change anything, but everyone else needs to change. For me, it’s about getting the younger players some game time on the Series because, as we’ve found even with the crossover athletes, their first tournament is being on the Series.

“Obviously they have to perform well down here before they go. I won’t just take them for the sake of it.”

Pool information for the first round of the 2016-17 HSBC World Rugby Women’s Sevens Series, Emirates Airline Dubai Rugby Sevens, will be drawn by World Rugby in due course. Updated USA Rugby residency lists for both men and women will be announced this month.

Note: It is intended that a sixth round will be added to the schedule in due course.