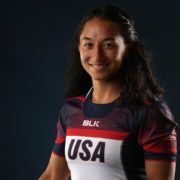 Led by captain Kelly Griffin, the U.S. will play the fifth match of the Women’s Rugby Sevens competition at Deodoro Stadium in the sport’s first foray in the Olympic Games Program. Saturday’s game can be viewed live on NBC Sports Network in the United States, with the Medal Matches of the three-day competition being aired Monday on CNBC. The full U.S. TV listings can be found on NBCOlympics.com.

Coincidentally, the starting seven against Fiji will be wearing jersey Nos. 1-7. The inspirational Jillion Potter will line up with her captain and Kathryn Johnson in the forwards, while Bui Baravilala and Alev Kelter will look to set the pacey Lauren Doyle and Victoria Folayan away for several tries in Brazil. In all, the seven hold 96 caps on the World Rugby Women’s Sevens Series under their belts.

Arriving before most of Team USA’s competitors at the Games of the XXXI Olympiad, Walker’s squad was one of the first to the Olympic Village. Despite the early arrival, the women’s team was unable to participate in Friday night’s Opening Ceremony due to the start date of the Rugby Sevens competition.

“The team preparation has been good,” Walker said of the team’s build-up week in Rio. “The players have been enjoying the experience but we know that tomorrow is the end of a long journey and, if they go out and enjoy the moment, the team will perform.”

Kickoff for the match against Fiji is scheduled for noon ET. Team USA will play its second match of Pool A play against Colombia at 5 p.m. ET Saturday, as well. Supporters in the United States unable to view the broadcast on television can stream the event online.