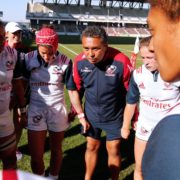 Collegiate student-athletes Tess Feury and Natalie Kosko, the former a capped Eagle in XVs, join Women’s Rugby World Cup pool athlete Sara Parsons on the trio’s first tour with the Sevens National Team. Currently ranked sixth in the Series standings, the U.S. will face Ireland, Japan, and Series-leader New Zealand in Pool A play at State Gabriel Montpied. The entire tournament can be viewed live in the United States for free on The Rugby Channel.

Feury and Kosko were on opposite sides of the field in May when the former’s Pennsylvania State University held on to claim the 2017 USA Rugby Women’s Division 1 Elite National Championship title against the latter’s Lindenwood University. Kosko did win a College 7s National Championship two weeks later, however, scoring four tries as the Lions went undefeated in six matches.

Both have been in prior National Team camps, while Walker and staff were given a first-hand account of Kosko’s readiness for international play as Lindenwood prepared for College 7s at the Chula Vista Elite Athlete Training Center. Feury has also been at the Training Center recently, playing in the Can-Am Series for Pete Steinberg’s Eagles in March, for which Walker is an assistant coach.

Parsons was a starter and reserve in the two matches against Canada, and is the fourth XVs athlete to earn a follow-up cap on the Series following Sylvia Braaten, Jordan Gray, Samantha Pankey, and Hope Rogers’ appearances earlier in the season. A loose forward for Northern Virginia Women’s Rugby Club, Parsons will complement the squad that sees the returns of Ryan Carlyle and Ashley Perry.

Cheta Emba, as well as Mata Hingano, has earned a successive selection to a Series squad following a long injury layoff having provided an extra spark to the attack in Langford, British Columbia. Possessing strength and speed, she will cause havoc on both sides of the ball with Jessica Javelet and Naya Tapper also able to threaten defenses. Alev Kelter and Joanne Fa’avesi round out the squad.

The Eagles open their final leg of the season against Ireland Saturday, June 24, at 6 a.m. ET. The tournament will be broadcast live on The Rugby Channel at no cost to viewers.