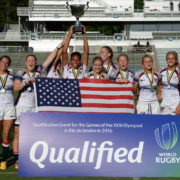 CARY, N.C. – The Women’s Eagles Sevens sent shockwaves through the North America Caribbean region Sunday with an 88-0 defeat of Mexico in the 2015 NACRA Sevens Championships Final, securing the U.S.’s place at the Rio 2016 Olympic Summer Games.

Lauren Doyle, Kelly Griffin, and Kate Zackary recorded hat tricks in the 20-minute match after the Eagles demonstrated their intent with a rampage through Saturday’s pool play and the Sunday knockout rounds.

In the five matches prior to the Final, the U.S. outscored its opponents 281-5. The 88-shutout even eclipsed the team’s 74-0 rout of Barbados earlier in the weekend, while each of the 12 Eagles scored at least one try during the tournament.

As they did all weekend long, the Eagles saw to it that the scoreboard did not read 0-0 after 60 seconds, with Kristen Thomas running down the touch line for the opening try. The defense played with purpose, as well, forcing Mexico towards its own try line for a clearance kick in the third minute. The ball did not travel too far, and Joanne Fa’avesi extended the lead to 14-0 with a run through two defenders.

The traffic was in the U.S.’s favor for the remainder of the match, and substitutes joined in on the scoring in the second half to see out the 88-0 victory.

Despite the lopsided scorelines, the Eagles played the clinical rugby expected of a champion.

“The fans come and pay money and they want to see great rugby,” Head Coach Ric Suggitt said after the match. “It’s not like we’re going out there to run up the score; that wasn’t the intent. The intent was to play good, clean, fast, wide-open, running rugby.

“[The 2015 NACRA Sevens Championship event] sure demonstrates the difference. That’s the reality of it. That’s where we are with women’s rugby in our region. It’s like the ‘Dream Team’ with Charles Barkley and them at the Olympics. They beat everyone by 60 points.”

The Eagles were one match away from finishing fourth in the 2014-15 World Rugby Women’s Sevens Series standings, an automatic-qualifying position, when they went into the Third-Place Match at Amsterdam Women’s Sevens last month. The Team GB representative came away victorious for the spot, sending the U.S. to the North America Caribbean Rugby Association regional qualifier.

“We had the year mapped out and we knew if we did a good enough job on the Series we’d qualify, and then we knew if we didn’t we’d be ready for this,” Suggitt said. “So there’s no bitterness or anything.

“It’s sport – one team wins, one team loses. We had 36 games to get it right on the Series and we missed out by one game. We weren’t going to let that happen here.”

One nation not in attendance at the eight-team women’s competition in North Carolina was Canada, which finished second on the Series. The U.S. will face its border rival in a round robin pool play at the Pan-American Games in Toronto next month, along with other nations from the Americas.

“Now we have to get ready because the competition will be stiff again in the Pan-Am Games,” Suggitt said. “We have our archenemy up north of us. They’ve had the best of us recently but we’re closing the gap. It gives us another opportunity to play some really good rugby games ahead of next season and the Olympics.

“It’s like base camp climbing up Mount Everest. We’re there now. Now we know where we have to be in August of 2016. That’s what we have 14 months to prepare for.”