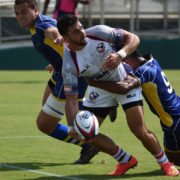 CARY, N.C. – After a bye earlier in the day at the 2015 NACRA Sevens Championships, the Men’s Eagles Sevens ran Barbados off of the WakeMed Soccer Park pitch to the tune of 54-0 Saturday.

Martin Iosefo scored two tries in the victory and the Eagles moved to two wins and zero losses after the forfeit by Saint Vincent and the Grenadines. Mike Friday’s squad will play their third of four Pool A matches, against Mexico, at 6:06 p.m. ET.

Folau Niua played a smart grubber just seconds into the match for Iosefo to chase, and the University of Montana and AIG Men’s Collegiate All-American man dotted down between the sticks for an early, statement lead.

Nate Augspurger converted the try and nearly scored one of his own on the other side of the restart, but he took his eyes off of the ball just as he was receiving the pass meters from the try line. Barbados was able to waste a few seconds with a kick to touch, but the Eagles quickly got the ball back for Danny Barrett to take in-goal.

The Eagles had scored two tries through the middle of the park and wanted to get Perry Baker into the match. The winger was taken into touch on one wing before sprinting to the other as Barbados set up its lineout throw. The U.S. stole it and quickly passed through hands to Baker for the third try of the match and 19-0 lead.

Iosefo and Niua each scored a try in the final minute of the opening frame to send the teams into the break with the Eagles holding a 33-0 lead. Friday, like Ric Suggitt on the women’s side of the tournament, inserted fresh legs at halftime.

Carlin Isles brought the crowd to its feet with his first touch of the ball, but he could not beat the defender on the wing. Chris Wyles forced a turnover a minute later for a scrum, Barbados took the lineout, and the Eagles stole it once again to gain possession. Isles received the ball on the opposite wing for a quick try and 40-0 lead.

Maka Unufe and Madison Hughes finished off the match with a try apiece to bring the final score to 54-0, though they had hoped to add a few more points to ensure a high seeding at the culmination of pool play.

The U.S. will play Mexico at 6:06 p.m. ET Saturday before the final match of pool play Sunday morning. All matches at the 2015 NACRA Sevens Championships are being streamed live on USA Rugby TV, with live match updates on Twitter provided by @USARugby.