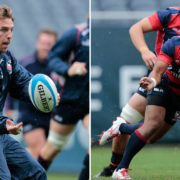 CHULA VISTA, Calif. – Chris Wyles will join Residency athletes and additional Men’s Eagles Sevens pool players at the June High Performance Camp at the Olympic Training Center, from which a squad of 12 will be selected for the 2015 NACRA Sevens Championships.

The Eagles won the Cup at Marriott London Sevens, the final leg of the nine-stop, 2014-15 World Rugby HBSC Sevens World Series, but finished outside of the top four in the end-of-season standings. England locked down fourth place during pool play before losing to the U.S. in the Cup Semifinal.

Mike Friday and co.’s attention now turns to Cary, N.C., where the U.S. will seek qualification for the Rio 2016 Olympic Summer Games through the North America Caribbean Rugby Association’s regional qualifier June 13-14. The lead-up camp will run June 1-10, with Wyles joining the team six days prior to NACRA Sevens, at the beginning of the World Rugby Regulation 9 window.

Though he has not made an appearance on the circuit since the Eagles reached the USA Sevens Cup Semifinal during the 2008-09 Series, Wyles – bearing 13 sevens caps and 45 test caps – is no stranger to international rugby or Friday.

“Chris has worked with me before as he was part of my England development group back in 2005,” the Eagles’ head coach said of the Saracens back. “He is coming to compete as he wants to and I think he has the character and traits that complement what we have within the squad and what we expect in our environment.

“Chris is under no illusion how hard it will be for him to break into the 12-man roster and that he has to earn the right at camp, not on reputation, if he wants to make the qualifier.”

Despite leaving Emirates Airline Glasgow Sevens early and missing the entirety of the London tournament due to injury, Zack Test will be available for selection for NACRA Sevens. Kingsley McGowan, who helped Saint Mary’s College win the Men’s Division I Plate at the 2015 USA Rugby College 7s National Championships last weekend, and Aladdin Schirmer of Central Washington University were invited to camp but will not be in attendance because of injury and school commitments, respectively.

Matai Leuta will also be in camp, but unavailable for the upcoming qualifier.

Shalom Suniula was not selected for any of the 2014-15 Series tournaments but was invited to the majority of the Men’s Eagles Sevens High Performance Camps held at the OTC throughout the season. He, as well as non-Residents Nate Augspurger and Martin Iosefo, will also train in Chula Vista next week.

“All the boys are motivated to do the shirt – and all it represents – justice.”

Canada – a core team on the circuit that finished three spots behind the sixth-place Eagles – is the only team scheduled to be in attendance at WakeMed Soccer Park next month that participated in at least one leg of this year’s Series. Bahamas and Mexico, which have previously competed at Serevi RugbyTown Sevens in Glendale, Colo., as well as Barbados and Cayman Islands, are just a few of the other nations contesting a Rio 2016 spot in the men’s competition.

Tickets for the 2015 NACRA Sevens Championships start at just $15 and can be purchased online via etix.com. Visit the NACRA Sevens event website for additional details. The full fixture list for the June 13-14 tournament will be released in the coming days.