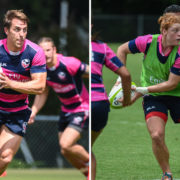 Rugby Sevens was added to the Games Program in 2009, 85 years after the United States won gold in the 15s game at the Paris Summer Games. Both the Men’s and Women’s Eagles Sevens nearly earned qualification for Rio through their respective World Rugby Sevens Series, but will have to prove themselves to fellow North America Caribbean Rugby Association nations in North Carolina.

“This is a huge weekend for us,” Eagle Chris Wyles said following Friday’s training session. “We see [qualification] as something that people are trying to take away from us, but, at the same time, everyone’s humble.”

Mike Friday’s side finished the 2014-15 World Rugby HSBC Sevens World Series on a high note with a Cup Final triumph at Marriott London Sevens. The U.S.’s first tournament victory on the circuit helped solidify the sixth-place position in the standings, 24 points from fourth.

“It doesn’t matter what’s happened before,” Wyles said. “We go to perform this weekend.”

Ric Suggitt’s Eagles reached their second Cup Final in the Women’s Sevens Series’ history at Atlanta 7s, the third leg of the season, to jump into the qualification conversation, and went into the final round in Amsterdam with a fourth-place finish in reach. England escaped the Netherlands with the qualification spot for Team GB, forcing the Eagles into the 2015 NACRA Sevens Championships.

Two new caps and a couple of other changes were included in the weekend’s roster for the U.S., but the team has been able to gel over the course of the season at the Olympic Training Center in Chula Vista, Calif.

“We’re all used to playing with each other, so it’s not anything new,” Eagle Alev Kelter said. “[Coach Suggitt] picked a bunch of hard workers, and we’re going to go out there and have some fun and do what we’re supposed to do.”

The men’s first match of the pool play against Saint Vincent and the Grenadines will be marked as a forfeit for the Caribbean nation, which was not able to attend. With an early tally in the win column, the Eagles will start pool play at 3:44 p.m. ET against Barbados.

The women will kick off pool play against Jamaica at 11:44 a.m. ET at the main stadium at WakeMed Soccer Park. Watch every match throughout the weekend on USA Rugby TV and join the conversation on social media with the #NACRASevens hashtag.

Visit the 2015 NACRA Sevens Championships website to see the full schedule and statistics from the weekend.