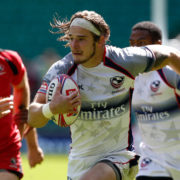 CHULA VISTA, Calif. – The Men’s Eagles Sevens will travel to the 2015 NACRA Sevens Championships in Cary, N.C., with 13 players fit to help the U.S. qualify for the Rio 2016 Olympic Summer Games.

Brett Thompson and Chris Wyles are among the travel squad, from which the head coach, Mike Friday, and his coaching staff will select 12 to wear a jersey Saturday, June 13, and Sunday, June 14, at WakeMed Soccer Park. Ten of the 12 members of the Eagles that won the Cup at Marriott London Sevens will also make the trip to the east coast.

Following his stint in the RaboDirect Pro12 with Edinburgh Rugby, Thompson returned to the Residency program at the Olympic Training Center, where he attended the Men’s Eagles Sevens’ High Performance Camps and worked with Assistant Coach Chris Brown to regain full fitness throughout the second half of the 2014-15 World Rugby HSBC Sevens World Series season.

Wyles’ last action in a U.S. jersey came in front of a sold-out crowd of 61,500 at Soldier Field in Chicago, where the Men’s Eagles competed for 80 minutes against the reigning Rugby World Cup-champion New Zealand All Blacks. Though he has not played international sevens since the 2008-09 Series, he has held down starting spots in several back line positions during his seven-season-strong career at Saracens Football Club.

“Thompson has been back with us for the last four months, so he is fully integrated into the squad and has been working hard and understands the culture and environment he is a part of,” Friday said. “‘Wylesy’ knows what is required in a professional culture and his character is one that is personable as well as competitive. He is a hard-working bloke who has humility, so he is well-suited to the squad.”

Matai Leuta scored his first try on the circuit at Emirates Airline Glasgow Sevens, the penultimate round of the nine-stop Series, and was instrumental in shoring up the forwards in the absence of an injured Zack Test at Twickenham Stadium the following weekend. Test, who played in his 50th career tournament at USA Sevens in Las Vegas, will be up for 2015 NACRA Sevens Championships selection as a member of the travel roster, while Leuta will remain at the OTC with an injury.

Despite the Eagles’ first-ever Cup Final victory to end the Series, Friday’s team finished the season in sixth with a record 108 points earned in nine tournaments. Canada, the only core team on the circuit participating in the NACRA regional qualifier, fell from sixth in 2013-14 to ninth.

Mexico, in Pool A with the Eagles in Cary, and Guyana both fought for a core team spot at Cathay Pacific/HSBC Hong Kong Sevens in the World Series Qualifier, though the reward ultimately went to Russia. Guyana is the only team participating at the 2015 NACRA Sevens Championships to have played in a Series leg since 2011-12.

“We are focused on what we need to be and be better at to give us the best opportunity to succeed,” Friday said. “We will work hard on the pitch and in the classroom so we are prepared.

“All the boys are focused on trying to make the team successful and represent the shirt and country in the way the people of the U.S. would want to be represented.”

The Eagles will kick off their regional qualification campaign against Saint Vincent and the Grenadines Saturday, June 13, at 1:22 p.m. ET. All matches throughout the weekend will be streamed live on USA Rugby TV. Tickets can be purchased online and at the gate at WakeMed Soccer Park for $15.

The final roster for the 2015 NACRA Sevens Championships will be released later this week.