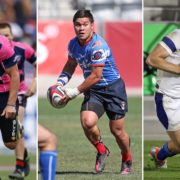 USA Rugby began hosting a full-time training program at the 155-acre complex in southern California in 2012, three years removed from the announcement that Rugby Sevens would be included on the Games Program in 2016 and 2020. With one Olympic quadrennial completed and another begun, residency participants for men and the Women’s Eagles Sevens are being finalized, and will be announced in October.

“We have to grow the depth in the squad,” Friday said. “Whilst we want to maintain momentum in the Sevens Series, we have a number of pressures on the squad, which means we have to develop and nurture more players that are capable of complementing and adding strength to the squad as we build towards 2018 and 2020.”

The Eagles replicated their best-ever Series standing of sixth place last season a year after winning their first Cup Final in London. Team USA’s rugby representatives in Rio this summer were products of the 10-round Series, with circuit debutantes Nate Ebner and Ben Pinkelman earning their Olympic selections at the end of an arduous six-week tournament and nearly two months of High Performance Camps.

Ebner’s return to the National Football League and Pinkelman’s scheduled surgery for this fall will keep both out of contention for selection for the foreseeable future, but the pool of talent not selected for Rio provides a plethora of bodies to fight for U.S. jerseys.

“We are currently recognized as one of the top sevens teams in the world and we need to keep moving forward as a program and group, and these newer players are going to have to learn quick and rise to the challenge,” Friday said. “The more experienced players are going to have to lead by example and educate and mentor the new players so that they are up to speed on what is expected and needed if we want to continue moving USA Rugby’s sevens forward.

“This is not an easy task and is going to have bumps in the road, but that is the challenge that we have if we want to continue to bring rugby to the forefront in the USA and compete with the traditional powers of rugby.”

Don Pati led Rugby Utah’s Club 7s team to a National Championship in Denver just days after the end of Team USA’s Olympic campaign, earning the Most Valuable Player award and a Dream Team nomination in the process. Pati has been included in Camps in the past and has suited up for the USA Falcons development side, as well, as has Spike Davis, Alex Elkins, and recent Davenport University graduate Anthony Welmers.

Davis and Elkins were high-scoring members of the inaugural Ohio Aviators squad that finished the first professional rugby season in the U.S. in second in the league table. Though the two were unable to realize their aspirations of representing their country at the Olympics, the full-time environment of a PRO Rugby franchise and determination to reach the next level of rugby sees them back in the national team fold.

Exciting collegiate talents Brady Gent of Davenport, Jihad Khabir of American International College, and Gabriel Ruflin of University of Utah represent the younger side of camp, and the skillful youth the country has to offer.

Several long-time residents of the OTC will not be returning imminently as the Men’s Eagles are beginning their own quadrennial towards Rugby World Cup 2019 in Tokyo. The Eagles will face the New Zealand Maori All Blacks this November as part of “The Rugby Weekend Presented by AIG,” and will attempt to qualify for the World Cup in 2017. Just as priority was given to the sevens program in the lead-up to Rio, the XVs program will have access to players that have become known commodities on the Series.

“There are a number of the existing squad that have aspirations to play XVs for the Eagles in what is an important year for World Cup qualification,” Friday said. “We will have to manage the players and their loads to ensure that they can service and achieve their goals in both XVs and sevens. With qualification in mind this will provide opportunities for hungry and talented rugby players in both arenas this coming year.

“We have identified a group and this first camp provides us and them an opportunity to see where they are at and what they can deliver amongst the residency group, who understand what it takes to be successful on the Sevens Series and how brutal and unforgiving international sevens can be.”

The Eagles will hold a further two camps prior to Emirates Airline Dubai Rugby Sevens, which kicks off in the United Arab Emirates Dec. 2. The U.S. has been grouped in Pool B with Rio bronze medalist South Africa, 2016 HSBC London Sevens Cup winner Scotland, and Rugby Africa Sevens champion Uganda.