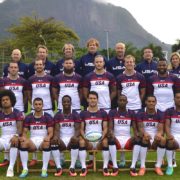 Led by captain Madison Hughes, Mike Friday’s side will play two matches on the fourth day of the Games, opening with the fifth-ranked Argentines before finishing the day against host Brazil at 5 p.m. ET. The first U.S. match will be aired live on NBC Sports Network, while CNBC will pick up the live broadcast of the second round of pool play. The full television listings for viewers in the United States can be found on NBCOlympics.com.

“We are in a good place,” Friday said. “Relaxed, focused, and eager to get on with playing. It’s going to be a very tough game as there is nothing between the two teams in the formbook. We need to ensure we execute our basics, outwork Argentina, and stay in the moment.”

With the women’s event now concluded – Australia, New Zealand, and Canada finished on the podium, respectively, and the U.S. placed fifth – the men take center stage in a sport quickly becoming the talk of the Games of the XXXI Olympiad. The three-day event will end with the medal round Thursday, Aug. 11.

The United States finished the latest 10-round World Rugby Sevens Series in sixth – two points behind Argentina. Hughes led the circuit in scoring and speedster Perry Baker was second in tries scored among more than 200 athletes. The partnership between Folau Niua and Maka Unufe in the midfield will link Baker and World’s Fastest Rugby Player Carlin Isles on the wings with the tenacious forward pack that includes Danny Barrett, Garrett Bender, Andrew Durutalo, and Ben Pinkelman.

Series standout and U.S. all-time leading try-scorer Zack Test provides additional leadership for Friday on the field plus his attacking threat, while Nate Ebner and Chris Wyles bring years of professionalism to the team in Rio.

Traveling reserves Nate Augspurger, Martin Iosefo, and Shalom Suniula have been fully immersed in training with the squad in Brazil should an injury replacement be required during the competition. They, as well as the dozen athletes that have been training at the Olympic Training Center in Chula Vista, Calif., the past two years, have made the U.S.’s dream of an Olympic medal possible. The 12 that take the field Tuesday will represent those teammates and the country with pride.

Kickoff for the match against Argentina is scheduled for noon ET. Supporters in the United States unable to view to the broadcast on television can stream the event via NBC Sports Live Extra at nbcsports.com/live.