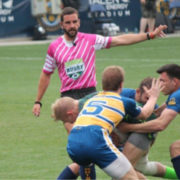 The USA Rugby Referee Department is pleased to announce the formation of a High-Performance Sevens Referee Pathway. This Pathway is an annual nine-month program for referee development and identification; it will begin with the Las Vegas Invitational Tournament in March and end with the World Rugby Pacific Rim Sevens and Emirates Airline Dubai Rugby Sevens in November.

“Our Sevens refereeing has been improving as can be seen by the selection of Mike O’Brien to the HSBC World Rugby Sevens Series in 2016-17,” Nelson said.

The Program will be supported by the High-Performance Management Group (HPMG), which now includes USAR National Referee Nick Ricono and former USAR Sevens Referee Program Manager and WR Sevens Referee Selector Patrick McNally. The team will work towards identifying a pool of eligible sevens referees, devising a sevens referee coaching curriculum, and then developing elite and regional sevens referees and referee coaches that can meet the demand of the ever-expanding sevens players, teams, and tournaments in the USA.

The pathway starts in March at the Las Vegas Invitational and is open to any referees that want to attend the event and the camp. All referees will be coached and given a development plan after each step in the program. Top performers will be identified and selected to move on to the next event in the pathway and, as the journey continues, the pool of elite referees will get more refined and should result with World Rugby nominations to the Rugby Americas North Sevens, Pacific Rim Sevens, or Dubai Sevens.

“We are super excited that referees can control their own destiny, and this program will allow for complete transparency in their development,” Ricono said. “Not only is this a program for referees, we are creating a path for referee coaches in the USA, too. Between each step the HPMG will rely on local development managers to help with the referee’s plans.