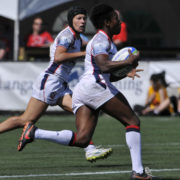 The Women’s Eagles Sevens have completed four of the six legs of the 2014-15 World Rugby Women’s Sevens Series and are just four points from Olympic qualification. Preview the team’s upcoming tournaments in London and Amsterdam this week with usarugby.org.

The Women’s Eagles Sevens are four points behind fourth-place France in the 2014-15 World Rugby Women’s Sevens Series despite having faced defending Series champion and current No. 1 New Zealand on more occasions this season than any other nation on the circuit.

Seventh- and sixth-place performances at Emirates Dubai Rugby Sevens and São Paulo Sevens, respectively, did enough to keep the Eagles within striking distance of the top five teams. New Zealand, Australia, Canada, France, and England finished first through fifth, respectively, in both of the opening tournaments.

When the Eagles followed their bronze-medal performance at Rugby World Cup Sevens 2013 with a seventh-place standing at the culmination of the 2013-14 Series, Head Coach Ric Suggitt stuck to the plan, knowing a fresh injection of athletic ability, coupled with experienced rugby players, would take the U.S. back to the podium.

One reason for the Eagles’ rise to fifth and improved performances against teams ranked in the top four this season is Lauren Doyle. An original Resident at the Olympic Training Center, Doyle led the Eagles in scoring at Canada Women’s Sevens with 40 points and eight tries, and was instrumental in keeping her team’s opponents to 13 tries scored. She also kept Australia from taking a late lead in the Atlanta 7s Cup Quarterfinal, a turning point in both teams’ seasons.

Up until that matchup, Australia had only lost two matches: the Cup Finals in Dubai and São Paulo. Following the upset at Fifth Third Bank Stadium at Kennesaw State University, Australia lost to the U.S. in the Plate Semifinal in Langford and dropped from second to third in the standings.

Doyle scored twice on three separate occasions at Canada Women’s Sevens and at least once in each match, save for the Cup Quarterfinal, in which no Eagle scored. The winger missed an extended period of the 2013-14 season with an injury, but she is back a more “complete rugby player.”

“The other coaches come up and ask me, ‘Who’s that player?’” Suggitt said. “Like they’ve never seen her before!

“I asked [Doyle] what’s happened and she said, ‘I figured the game out.’ I’ve been saying it takes about two years of sevens to play at this level. She’s enjoying the tackling, moving the ball to the outside, the support lines. And she’s very fit.

“Having Bui [Baravilala] at the outside half position – someone who moves the ball quite well with both hands and is very calm and reassuring out there – is good for Lauren. We’re pretty happy for her; she’s just got to keep working.”

The Eagles have also benefitted from the partnership between Doyle and Victoria Folayan, the U.S.’s all-time leading points- and try-scorer. In matches in which both have scored, the Eagles are 5-0. Speed kills in sevens, and the team was set to be even faster headed to London and Amsterdam.

Former Olympic bobsledder Emily Azevedo has attended multiple selection camps throughout the current season and was selected to the team for the final two legs, but was unable to travel with the Eagles to London. According to Suggitt, Azevedo runs a 40-yard dash quicker than both Doyle and Folayan.

Kate Zackary fills in for Azevedo, while Hannah Lopez and Rebekah Siebach have taken the places of Melissa Fowler and Joanne Fa’avesi in the match-day 12.

“We lose a little speed but we are near equal in size and aggression with Kate in the lineup,” Suggitt said. “Kate is a good straight-ahead runner and will get us going forward when we need it. Hannah, when on her game, is very evasive and has the ability to see space early. We expect Hannah to find the form that she had here last year when we were in Amsterdam.”

Siebach has not pulled on the U.S. shirt on the circuit since Guangzhou Women’s Sevens during the 2013-14 Series, six tournaments ago. She is one of the few players still with the team to have represented the Eagles prior to the inaugural Series in 2012-13.

“This is a great opportunity for Bex,” Suggitt said. “She is very quick and will be backing up Alev [Kelter] at the half back position. Bex has a great attitude and she is an excellent team player. Having her with us gives us a little bit more international experience and she should be good to close out the last three to four minutes of any game.”

The three changes to the roster came after the initial 12 were selected, but any 12 athletes chosen from the program at the Olympic Training Center would be able to step up and perform at the international level.

“It does not affect us that much,” Suggitt said of the late substitutions. “They all train together and are interchangeable. We have the mindset at training that it is everyone’s responsibility to help each other to get better just in case we get late changes like the ones that occurred this week.”

It will be the second time since the start of the Series in 2012 that two tournaments are held in consecutive weekends, a feature prominent on the men’s circuit. With six matches in two days, it is useful to have time between tournaments for recovery purposes, but Suggitt is confident in the strength and conditioning program implemented by his staff.

“They go through the rigors week in, week out,” he said. “It shouldn’t be a problem for us. We go right after it and do a proper recovery week when we come back from any tournament, so we’ll just follow that formula and do what we do at home in a hotel.

“What it’s going to come down to in these last two tournaments is the will to win. Who can dig the deepest and keep pushing ahead? We could battle for a top-two spot, but we have to be on all the time. You can’t choose one game then just fall off.”

The Eagles will meet China, Fiji, and Australia in pool play in London May 15. They have not faced China or Fiji since Dubai, where the U.S. set the record for largest win margin against the former. Fiji sits outside the Olympic bubble with 24 points, but did beat the Eagles in their only matchup.

Watch the remaining legs of the 2014-15 Series on World Rugby’s website, beginning with London Women’s Sevens from Twickenham Stoop.