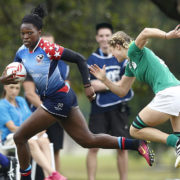 Samantha Pankey will replace Cheta Emba in the Women’s Eagles Sevens squad for this weekend’s HSBC USA Sevens. Emba will play in the Las Vegas Invitational with the USA Falcons.

Alev Kelter will captain the side for the second consecutive tournament following a silver medal campaign at HSBC Sydney7s earlier this month. The Eagles will play Fiji, Ireland, and Spain in pool play at Sam Boyd Stadium Friday, March 3, beginning with an 11:17 a.m. ET kickoff. The entire women’s event will be broadcast live to viewers in the United States on The Rugby Channel.

Kelter recorded 36 points in six matches in Australia as the Eagles reached their first Cup Final since their 2015 home tournament in Atlanta. Kelly Griffin, previous team captain and named to the Vegas squad, brought a stable, veteran experience to the team in Sydney, assisting her fellow Team USA Olympian in the role.

“Alev really wants to work hard and be a good teammate for her team,” Walker said of his captain. “Naming her captain for Australia, as we saw, kind of brought her game alive a bit more; the Alev Kelter of old we’re used to. She’s such a great person and always has ideas and is thinking of things to make the team better. She brings that off the field as captain, as well. She’s always involved with the players.”

Only Naya Tapper had more points in a U.S. jersey in Sydney, scoring a tournament-high nine tries for 45 points. She scored at least one try in five matches, including a hat trick of five-pointers in the Cup Final defeat to Canada that earned her the Player of the Final award. She and Kristen Thomas, who had her Australian campaign come to a premature end for precautionary reasons, will be the Eagles’ strike weapons on the wings.

Kelsi Stockert will make her Series debut in Las Vegas having just returned from Okinawa, Japan, where the USA Falcons beat developmental sides from Australia and France to win the Okinawa Sevens invitational tournament. The Seattle Saracen scored a crucial late try in the Falcons’ final round robin match against Australia to solidify the team’s Final place, and has been capped several times in the XVs code. Her speed and one-on-one abilities will complement the likes of Cheta Emba and Kate Zackary in the forwards.

Zackary, captain of the Falcons in Japan, and Emba were two of five members of the developmental squad that had been with the Eagles in Australia.

“The Falcons tour was more about giving the players the freedom to work on things,” Walker said of the Andrew Locke-coached developmental squad. “We didn’t care if we won or lost – we just wanted them to get better on their work-ons. Winning was a great bonus for them because it was a short trip; they came back quite happy and ready to train again.”

Bulou Mataitoga is back in the team having made her Series debut to open the season at Emirates Airline Dubai Rugby Sevens. Unable to travel to Australia and Japan, Mataitoga has continued to train at the Chula Vista Elite Athlete Training Center and will resume her duties in the fly half position behind Ryan Carlyle. Joanne Fa’avesi and Nicole Heavirland also strengthen the group of half backs with Kelter assuming more of a midfield role.

Debutant Nicole Snyder helped Bloomsburg University to lengthy postseason runs in both XVs and sevens in recent years, and will have her first opportunity against senior international competition at USA Sevens.

The women’s event will be played over the course of two days – Friday, March 3, and Saturday, March 4 – beginning with an early-morning start to pool play for the home team. A Falcons side, featuring four Eagles capped on the Series, will also be in town competing in the Women’s Elite 7s division at the Las Vegas Invitational tournament, coached by former Eagle and Girls High School All-Americans powered by Atavus assistant coach Emilie Bydwell.

“There’s going to be a lot of expectations with the home tournament,” Walker said. “We just have to play game to game and take it day by day. Our staff are preparing for all of the distractions that might occur.”

Action kicks off in Pool B at 11:17 a.m. ET inside Sam Boyd Stadium when the Eagles line up against Ireland. Pool play will continue through the day with all matches broadcast live on The Rugby Channel. To purchase tickets to USA Sevens and find further information on the Las Vegas Invitational, visit the tournament website.