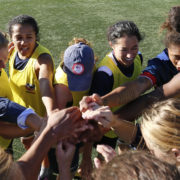 Formerly held in Houston (2013) and Atlanta (2014-16), the U.S.-hosted leg of the Series will match up with the men’s Series tournament this weekend, opening play Friday and Saturday inside the stadium. The tournament will be played over the course of two days rather than the three-day men’s event, and will be broadcast live to viewers in the United States on The Rugby Channel.

Nearly two months had passed between Emirates Airline Dubai Rugby Sevens, the first leg of the 2016-17 season, and HSBC Sydney7s. The Women’s Eagles Sevens had departed the United Arab Emirates with a disappointing 11th-place standing from two victories in five matches. Even if one of the wins had been at the expense of eventual tournament bronze medalist Russia, the U.S. had not performed to its expected standard.

Kristen Thomas had not yet been available coming off of an injury sustained in May and Head Coach Richie Walker had selected five young athletes without previous Series experience. Using Dubai to give those players Series game time and to gauge where some of the other international programs were just a few months following the Rio 2016 Olympic Summer Games, he knew how to prepare the squad for the Series’ first go-round in Australia.

Naya Tapper’s brace of tries could not see the Eagles over a composed Russia team to open pool play, but the Eagles came out flying against England to improve their standing in Pool C. Thomas found the try zone after England’s captain had opened the scoring within 60 seconds and Nicole Heavirland brought the Eagles closer at halftime when England extended its advantage. The second half was back and forth and then some, but captain Alev Kelter scored twice in the final minutes to pull out the victory.

Hope Rogers made her impact felt against Spain to ensure the Eagles reached the Cup round, where a slim defeat of Ireland was followed up by a dominant performance against New Zealand for the team’s third Cup Final qualification. A hat-trick performance by Tapper was nullified by a determined Canada in the Final, though the Eagles gained the accolades for improvement in addition to 18 Series standings points to push them into sixth.

The overall experience level of the team was higher in Sydney than Dubai not just because of several players no longer considered “debutants,” but by the return of Olympic captain Kelly Griffin – now coaching at National Development Academy Santa Barbara Rugby Academy – and Thomas. Additionally, Walker had identified and worked on the weaknesses from the first round; namely effectiveness in the breakdown.

“When we look back, we had Kate Zackary and Cheta Emba starting in the forwards for us in Dubai,” Walker said. “Fast forward to Australia – we had Kris [Thomas] and [Kelly] ‘Grif,’ which brings that experience. We had lost our finishers in Dubai with Naya suspended. Bulou [Mataitoga] had to play on the wing but had never trained there. Once we had those finishers in Australia that really helped us score points and become more of a threat.

“Our focus coming back from Dubai was the ruck area. In the past we’ve tried to have them not lead with their hands. In Sydney they led with their shoulders and were getting rid of people instead of competing with them. When we go in with our hands and arms it’s just a fight, fifty-fifty, who’s going to win. With shoulders low we almost won 90 percent of the time.”

Tapper was named Player of the Final and joined her captain on the tournament Dream Team when all was said and done at Allianz Stadium. The two were standouts for the pundits, and influential, in Walker’s eyes, to the team’s success. Kelter, in her first tournament as captain, did have a veteran in Griffin to ease her into the role, but it was a subtle on-field move by the head coach that helped her play flourish in Australia.

“Moving Alev out to center gives her more room with the ball – more freedom,” Walker said. “When she’s stuck at scrum half she’s around people all the time. She’s strong, but she doesn’t get to showcase what she’s good at there. Giving her more space also helped us attack forward because she just loves to run forward, and having those strike wingers out wide allowed us to finish.”

Held out for a bit in Australia, Thomas is fit enough to play in Las Vegas. She and Tapper will be first-choice wings for Walker, with a speedy threat on the other side of the field in debutant Kelsi Stockert available in the forwards. Nicole Snyder will also be licking her chops for Series action having quickly made an impression in her short rugby-playing career for Bloomsburg University. Perhaps not as quick as some of her teammates, the added physical presence will challenge the U.S.’s opponents.

Ireland has played spoiler for the Eagles on several occasions in the past two years – including standing in the way of a Challenge Trophy Final appearance in Dubai. In the Sydney Cup Quarterfinal Ireland was not too far off of the pace for an equalizer, either, as the Eagles benefitted from several misplaced passes and knocks. Currently ninth in the standings, Ireland will play its eighth Series match against the Eagles in the first game at Sam Boyd Stadium.

Spain only recently ended its winless streak against the Eagles, beating the U.S. before taking the repechage spot in Rio. Led by the highly-experienced Patricia Garcia and Maria Casado, Spain has not been able to replicate its repechage play. In fact, Las Leones have won just three matches this season – two against Brazil (the third matchup went the way of the South Americans) and one against Sydney’s invited nation, Papua New Guinea.

Fiji’s women’s team may not have the trophies in its cabinet to match its men’s, but that does not mean the style of play is not reminiscent of the Rio 2016 gold medalists. The Fijiana have given the top-tier teams a run for their money on more than a few occasions, including three defeats of France and wins against Canada and Russia in the knockout rounds this season alone. It will be the first time the Eagles have matched up against Fiji this year, with a knockout victory on the Series last May on the U.S.’s side.

“We were successful in Australia,” Walker said. “It’s pretty hard to get to the top, but it’s even harder to stay there. We also know the lower-seed teams are growing. We know our pool is going to come out with everything they have because they’re getting better and better. Ireland a year ago are not the Ireland they are now.”

The Women’s Sevens Series is available to viewers in the United States on The Rugby Channel, including every match of HSBC USA Sevens inside Sam Boyd Stadium. Matches start in the early morning Friday, March 3, and Saturday, March 4, with the Eagles up first at 11:17 a.m. ET on Day One. For those not able to view the tournament live in Las Vegas or on The Rugby Channel, USA Rugby will provide live match updates on Twitter (@USARugby).