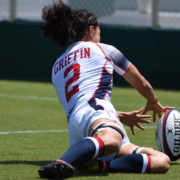 CARY, N.C. – Lauren Doyle recorded a first-half hat trick and the Women’s Eagles Sevens moved one step closer to Rio 2016 with a 45-0 defeat of Jamaica in their first match at the 2015 NACRA Sevens Championships Saturday.

Fans at WakeMed Soccer Park were treated to a high-scoring, albeit one-sided, affair featuring the home team at the Main Stadium. Fans around the country and the world were also able to watch the match live on USA Rugby TV, which will broadcast the full tournament live throughout the weekend.

The Eagles wasted no time in getting on the front foot and kept the pressure throughout the 14 minutes, as Jamaica kicked off the match from midfield and did not reach it a second time. Joanne Fa’avesi gathered the ball cleanly and Alev Kelter hit Doyle with an offload to the inside at the 10 before the winger burst through the defensive line for the opening score.

Doyle scored her second try of the match from a scrum between Jamaica’s 10 and 22 in the fifth minute and added the third on the other side of the restart to extend the U.S.’s lead to 24-0. Griffin’s second try in the final minute of the half gave the Eagles a 31-0 lead after seven minutes.

Head Coach Ric Suggitt made a few changes during the break, but the Eagles did not lose a step. Kelter’s kickoff was bundled by Jamaica on the second-half restart and Kelter recovered before running forward and finding Kristen Thomas on the wing for the try. Carmen Farmer, in her first appearance with the Women’s Eagles Sevens, got herself on the scoresheet in the 10th minute after a determined physical effort outside the try line by the substitutions to bring the final score to 45-0.

The U.S. will continue pool play in Pool A against Barbados at 2:06 p.m. ET before its final match of the day versus Cayman Islands at 4:28 p.m. ET. All matches at the 2015 NACRA Sevens Championships can be viewed live on USA Rugby TV.