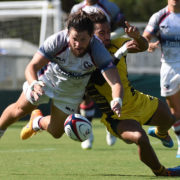 CARY, N.C. – The Men’s Eagles Sevens took the top spot in Pool A at the 2015 NACRA Sevens Championships Sunday with a 40-5 defeat of Jamaica at WakeMed Soccer Park.

The match did not start as quickly as the team’s wins against Barbados and Mexico Saturday, but the Eagles scored the all-important first try. After probing play in Jamaica’s half in the first three minutes, Maka Unufe took the game by the scruff of the neck and ran under the posts to open the scoring.

The Eagles lost the ball between Jamaica’s 10 and 22 and their opposition kicked it downfield, but could not beat Carlin Isles to the ball. Isles gathered the ball neatly under pressure and sprinted through the mismatched defense for the try and 14-0 lead.

A Jamaican try in the corner at the end of the half spurred the Eagles to a more dominant performance in the second frame. Perry Baker showed off his own speed with a run from the U.S. 22 in the ninth minute and Madison Hughes followed up the play with a try of his own on the restart.

The physicality that helped Danny Barrett earn a Marriott London Sevens Dream Team nomination gave Chris Wyles a try-scoring opportunity in the final minute of the match, and Nate Augspurger added one for extra measure thanks to a slick pass from Baker for a 40-5 final score.

With Canada’s defeat of Cayman Islands and Guyana’s defeat of Trinidad and Tobago, the Eagles match up with Cayman Islands in the Cup Semifinal. The 11:45 a.m. ET kickoff will be streamed live on USA Rugby TV, as will the entirety of the 2015 NACRA Sevens Championships.