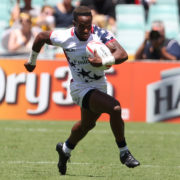 Kevon Williams sustained an injury in training at the Chula Vista Elite Athlete Training Center following his selection to the Men’s Eagles Sevens’ HSBC Wellington Sevens and HSBC Sydney7s team and will be replaced by Old Blue of New York’s Connor Wallace Sims, who will be making his HSBC World Rugby Sevens Series debut.

Head Coach Mike Friday has selected a travel squad of 12 athletes for the Jan. 28-29 tournament and HSBC Sydney7s, the latter to be held in conjunction with the Women’s Sevens Series event in Australia, Feb. 4-5. Captain Madison Hughes returns to the team following an early leave from the opening doubleheader weekends, as do Carlin Isles and Brett Thompson, who were previously injured. The Eagles kick off Pool C play against ninth-ranked France Friday at 7:18 p.m. ET, with the Wellington Sevens live stream available to viewers in the United States on the World Rugby Sevens Series website.

Perry Baker relieved Hughes of captaincy duties at HSBC Cape Town 7s, where the Eagles were knocked out of the Fifth-Place Semifinal by reigning Series champion and Rio 2016 Olympic Summer Games gold medalist Fiji. Following a five-try output at Emirates Airline Dubai Rugby Sevens and recognition for his improved offensive and defensive abilities, Baker scored five tries in South Africa to increase his DHL Performance Tracker ranking to second. His 10 scores also helped him surpass Isles on the U.S.’s all-time try-scoring chart with a total of 86 put-downs in 21 tournaments.

“Perry was outstanding in the last two legs not only in attack but also his defensive work and efforts,” Friday said, who called for Baker to be selected to the Cape Town Dream Team. “He is proving to be a consistent performer on the circuit. This is not a question of luck but more the hard work and study of his craft in between tournaments and on the training pitch. His work ethic to be the best he can is still burning bright and long may it continue. He is maturing into a fine rugby player.”

Though he led all Olympians in tries scored in Rio last summer, Isles has not made an appearance on the circuit since HSBC USA Sevens 10 months ago. Initially missing the Canadian leg of the 2015-16 season in an attempt to qualify as a track athlete at the Games of the XXXI Olympiad, he aggravated an injury in Brazil that required ample recovery time. Third behind Baker and Zack Test in tries scored for the Eagles, the “Fastest Man in Rugby” will give Friday another threat in attack in a dangerous Pool C.

Thompson only just missed being ready for Rio after he had suffered a mid-season injury and was not available for the Dubai and Cape Town legs following a recovery setback, but the University of Arizona graduate is prepared to take the field this month. He will join Danny Barrett and Andrew Durutalo as experienced forwards in the team, having made his Series debut during the 2012-13 season.

Folau Niua and Stephen Tomasin led the attack and took over the goal-kicking for the Eagles in Cape Town with Hughes away from the squad, while Matai Leuta found his Series legs for the first time since the fourth round of the 2015-16 season in Dubai. They, along with the now-capped Don Pati and Olympian Martin Iosefo, regain their jersey numbers from December.

Kevon Williams provided a youthful exuberance to Friday’s team in his debut tournaments for the Eagles, and showcased the speed and knowledge of the game he had previously put on display domestically. Isles reclaims the No. 1 shirt, but the Denver Barbarian played himself into a tour spot with consistent and determined work in training at the Chula Vista Elite Athlete Training Center.

“Kevon is an all-rounder who is capable of playing across the back line,” Friday said. “He can bring additional speed, but he also has fast feet and acceleration as well as distribution. He has a very good character and work ethic.”

The Eagles are 6-5 thus far on the Series, holding an eighth-place ranking in the Standings on 18 points. They have the opportunity to distance themselves from France – also on 18 points – with a positive pool campaign in Wellington, which includes matches against fifth-ranked New Zealand and 2016 HSBC Paris 7s Cup winner Samoa. The Kiwis won Cape Town’s Bronze Final while France won the Challenge Trophy to carry momentum into this next tournament.

The Saturday schedule in Wellington will begin Friday, Jan. 27, in the United States, with the Eagles’ opening match against France available to stream on World Rugby’s Sevens Series website from 7:18 p.m. ET. Live match updates will also be provided by USA Rugby’s Twitter account (@USARugby).