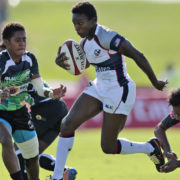 LONDON – The Women’s Eagles Sevens qualified for the Cup Quarterfinals at London Women’s Sevens Friday with two wins to open the penultimate round of the 2014-15 World Rugby Women’s Sevens Series.

Twenty-six days after taking the Plate at Canada Women’s Sevens, the Eagles took to the pitch knowing anything but a Cup berth could end their hopes of qualifying for the Rio 2016 Olympic Summer Games. China, against which the U.S. set the Series record for widest margin of victory at Emirates Dubai Rugby Sevens, scored its first points of the season against the Eagles after Folayan and Alev Kelter dotted down in the first half.

The Eagles followed up their victory with a similar first-half performance against Fiji, another side Suggitt’s squad has only played once this year. Also in Dubai, Fiji proved too unconventional and quick for the Eagles, who had put everything on the line to open the Series against the likes of New Zealand and Russia in pool play and Canada in the Cup Quarterfinal.

Kelter’s kickoff was slapped backwards by Kathryn Johnson, a prevalent force on the restarts in both of the first two matches Friday. Megan Bonny received the ball on the wing and sent a pass back inside to Kelly Griffin, but the captain could not quite get her hands on it. The ball bounced to Kelter, who put her head down to run through the gap created with the “skip pass” to dot down in-goal.

Fiji responded to the 7-0 deficit with efficient ball movement from touch line to touch line, eventually catching the Eagles out of their defensive shape. Bonny made a last-ditch tackle outside the U.S.’s 22 and stole the ball in the breakdown with perfect form. After a scrum one phase later, Folayan fended one tackle and ran 80 meters for her third try of the day.

Though she did manage to find the try zone once in the win against China, Lauren Doyle found opportunities with ball in hand few and far between at the Stoop. One such opportunity was ended with a pass to ground on the wing, but Doyle drew a penalty on the Fijians to set up her team’s next score.

The Eagles used the possession retained to wear down Fiji in the final minute of the half, and another pass that eluded Doyle was calmly recovered with boot and hand for a forward run. Bui Baravilala nearly reached over the line to dot down but could not without a double movement, but the referee restarted play with a penalty against Fiji. Doyle and Folayan tricked the defenders with a loose ball five meters from the line and Folayan finished the half with the try.

The head coach wanted his team to “run [Fiji] off the park,” holding a second consecutive 19-0 lead at halftime. However, it was Fiji that ran rampant in the opening minutes of the second half.

Bonny lost the restart forward and Pricilla Sauvavi Siata picked up the ball for a quick try inside the first minute of the frame. Less than a minute later, Baravilala lost possession in the breakdown and Fiji scored a try one would only expect from Fijian sevens. Rusila Nagasau offloaded to Asinate Ufia Savu on the wing and Savu drew the last defender before popping the ball out to Litia Naiqato in the tackle. Doyle came across the pitch to get her arms around Naiqato, who had already crossed the try line to make the score 19-12.

With two minutes to play, Folayan took a penalty at midfield and Fiji began the attack quickly. The ball reached Savu, and the player on the wing fended Kate Zackary to level the score at 19-19.

The Eagles continued play on the restart despite Fiji’s kickoff not reaching the 10-meter line. Kelter roamed across midfield from right to left and got a wide pass out to Kristen Thomas, who took three defenders with her on the way to the 22. Fiji took a penalty in front of the posts and Griffin took a quick tap and ran through a tackle to add the insurance marker with less than a minute remaining on the game clock.

The referee blew the full-time whistle shortly after Baravilala’s conversion attempt to bring the match to an end at 24-19.

With six points from two wins and Australia also having beaten China and Fiji in pool play, the Aussies and Eagles have advanced to the Cup Quarterfinals. The two will finish pool play against each other at 1:34 p.m. ET. The match can be viewed live on World Rugby’s website, while updates will be provided on Twitter by @USARugby.