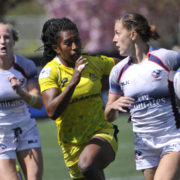 LONDON – The Women’s Eagles Sevens will play France in the London Women’s Sevens Cup Quarterfinals after finishing second in Pool C with a 12-12 draw with Australia Friday.

France shut out the U.S. in the same matchup at Canada Women’s Sevens last month, extended the gap between fourth and fifth place – and Olympic qualification – in the Series standings to four points. With a win, the Eagles would ensure France does not gain more than 12 points from the weekend at Twickenham Stoop.

Victoria Folayan scored four tries in two matches earlier in the day and looked set to add to the tally from the opening kickoff. She caught the restart and took a few steps towards the inside of the pitch before accelerating between two defenders Folayan reached the 22 and the Eagles pushed forward, drawing multiple penalties in the process.

A penalty 10 meters from the try line was taken quickly by Kelly Griffin, and Lauren Doyle sent a quick ball to Bui Baravilaa, who fended one tackler as she rounded the outside of the defense into the try zone.

A turnover in the fifth minute cost the Eagles, as Megan Bonny’s inaccurate pass found the hands of an Australia. Alev Kelter managed to wrap Shannon Parry as she crossed the try line, but Parry cut her side’s deficit to 7-5.

After nearly seven minutes of back-and-forth rugby, a solo effort by Doyle ended the first half. The winger saw just enough space in the defense and a lane to the try line with only Charlotte Caslick to beat at full back. Doyle split the two defenders with one fend and was too fast for Caslick, thought the attempted conversion not far from the touch line was unsuccessful.

Less than a minute into the second half, Kathryn Johnson drew the referee’s whistle with an apparent strip, but she was called for playing the ball on the ground. Sharni Williams leveled the match at 12-12 after the quick tap.

Both teams created opportunities to score in the remaining six minutes of the half, but they also played the same high-quality defense to keep each other out of the try zone. Australia went on the attack with no time remaining on the clock and got as far as the Eagles’ 10 before deciding to end the match in a draw, which kept the U.S. in second with Australia’s superior points differential.