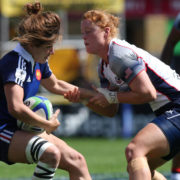 The Eagles beat France in the Cup Quarterfinal and lost to Canada in the Cup Semifinal earlier in the day at Twickenham Stoop to set up the match inside the home of England Rugby. With the U.S.’s fourth-place finish and France’s Plate Final loss, the two nations are now level on points for fourth in the Series standings.

Bui Baravilala and Victoria Folayan each scored 20 points for the Eagles on day two, while Folayan and Alev Kelter were named to the weekend’s Dream Team.

France’s shutout victory in the Canada Women’s Sevens Cup Quarterfinal last month had spurred the Eagles on to a Plate Final win against the host nation, but the U.S. was not looking for motivation Saturday. Folayan and Baravilala scored first- and third-minute tries, respectively, to give the Eagles a 12-0 lead until Chloe Pelle’s try to end the half cut France’s deficit to 12-7.

The match had all the makings of a struggle for Rio 2016 Olympic Summer Games qualification, and the scoreless streak to open the second half was broken by Fanny Horta for a 12-12 score line. With time ticking down and France threatening inside the Eagles’ 22, substitute Kristen Thomas pounced on a loose ball from a misplaced pass before fending a tackle and running 80 meters for the match-winning score.

Ensuring a higher finish than France helped the Eagles’ race to fourth in the standings, but a berth in the Cup Final would have given the team some breathing space ahead of Les Blues. Canada, however, had its own sights set on the Final at Twickenham Stadium.

The Eagles gave up possession from the opening kickoff and Kayla Moleschi took her side down the wing with a barn-storming run before Brittany Benn grabbed the ball from the ruck and dove over the line for a 5-0 lead. Errors and turnovers kept the Eagles from getting the next try, while the defense could only hold the second-ranked neighbors until the fifth minute, when Ashley Steacy cut inside in front of the posts to extend the lead to 12-0.

Kelter’s pressure as scrum half in a seventh-minute scrum resulted in a turnover, and Folayan broke one tackle before fending another to get the Eagles on the scoreboard before the break.

Ghislaine Landry lost possession for her side with a chip kick that went directly into touch, and the Eagles went down the pitch in force starting with a fend from Baravilala. Captain Kelly Griffin did well not to lose the ball in the tackle and Kelter took an extra defender out of the play by refusing to go down in contact until she reached the 22, then the Eagles quickly passed the ball wide to Folayan in space for the try and 14-12 lead.

Kathryn Johnson and Folayan made a few monstrous tackles in the minute following the Eagles’ second try but Canada’s pressure was enough to retake the lead through Magali Harvey on the wing. The Eagles could not find a final try and lost, 17-14.

For just the second time in the 14-tournament history of the Women’s Sevens Series, New Zealand failed to reach the Cup Final. The previously-undefeated reigning Series champion suffered its first loss of the season Friday to Spain, while Australia was on a mission in the Cup Semifinals Saturday.

The Eagles were off to the perfect start in front of a raucous crowd at Twickenham Stadium that had just seen the Men’s Eagles Sevens defeat South Africa to finish pool play at Marriott London Sevens 3-0, as Kelter opened the scoring in the first minute. The Dream Team selection received the ball at midfield and bet on herself to beat two defenders and run 50 meters for the try and 7-0 lead.

Baravilala opened the field for Folayan to score in the third minute before Gayle Broughton replied in the fifth minute with a try straight from the quick tap. Portia Woodman scored her 50th try of the season in the eighth minute to bring New Zealand closer at 14-12, but Baravilala got the all-important next try with support on Folayan’s run to extend the lead to 19-12.

Woodman brought New Zealand within 15 meters of the try line and Sarah Goss and Shiray Tane made the Eagles work to make tackles before Tane was able to dot down over the line for a 19-17 U.S. lead. New Zealand was offered one last chance at a victory with possession in the final seconds, and nearly every player on the pitch wearing black got a touch on the ball as the attack flowed down the pitch and Katarina Whata-Simpkins finished it with a try under the sticks.

The Eagles will need to fare better than France, England, and Russia at Amsterdam Women’s Sevens next weekend to finish fourth in the Series and automatically qualify for Rio 2016. Should they finish below France or allow England or Russia to overtake the two- and eight-point gaps, respectively, the Eagles will have to seek qualification at the 2015 NACRA Sevens Championships in Cary, N.C., next month.

Pools and fixture times for the final round of the 2014-15 World Rugby Women’s Sevens Series will be announced this week.