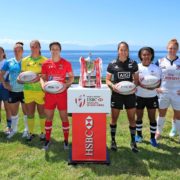 LANGFORD, British Columbia – The HSBC World Rugby Women’s Sevens Series has been on a month-long hiatus following the first leg to be held in Japan and will resume this weekend, May 27-28, at HSBC Canada Sevens.

The circuit returns to Westhills Stadium for a third consecutive year, with the USA Women’s Eagles Sevens having beaten Canada on home soil in a 2015 Plate Final (now Fifth-Place Final) before the host nation captured the Plate last season. The fifth round of the season will get underway with the U.S. opening pool play against England Saturday at 1:30 p.m. ET until the final match of the day kicks off at 8:48 p.m. ET. All matches can be watched live on The Rugby Channel.

The move from Atlanta to Las Vegas gave the Eagles a new legion of American rugby fans to wow at HSBC USA Sevens in early March, bringing more than 20,000 supporters to their feet in a Bronze Final campaign that ended in defeat (yes, to Canada). A core group including top scorers Alev Kelter and Naya Tapper welcomed debutants Samantha Pankey, Nicole Snyder, and Kelsi Stockert to the Series, while the latter duo earned consecutive selections to HSBC Kitakyushu Sevens last month.

The U.S. came out of the gates strong in Japan, racking up a three-try lead against ‘bogey’ team Spain through seven minutes with defensive turnovers and clinical passing to utilize the full width of the field. Spain, while would end up in a Challenge Trophy Final, capitalized on two opportunities in the second half to bring the final score to a more respectable 19-10. Tapper took over the second match against England, recording a first-half hat trick to nullify the opposition’s opener prior to debutant Lilly Durbin crossing the try line for her first score in her second match on the circuit.

Jordan Gray, another sevens debutant with a 15s pedigree, was a handful with ball in hand throughout the tournament. Defensively she also kept teams honest with a long reach and powerful frame, but Canada found ways around her and the Eagles in the Brigham Young University Graduate’s first start to end pool play. Falling behind early did not phase the Rio 2016 Olympic Summer Games bronze medalist, as Series-leading points scorer Ghislaine Landry accounted for 14 points in the comeback, 29-12, defeat of the U.S.

Canada’s win – its third in three matches – put the Eagles in a Cup Quarterfinal against Fiji, which leveled the knockout game at 12-12 shortly into the second frame prior to pulling away for a 26-19 victory. Though they beat England the day before, the Eagles let the gap grow too far in the Fifth-Place Semifinal and fell into a seventh-place match, 26-24. It all came together for Head Coach Richie Walker’s side against perennial contender France in the Seventh-Place Final, a 31-14 victory.

Tapper’s eight tries in six games were a tournament-best, tied with Canada’s Julia Greenshields. Forty points for each were second-best behind Landry’s 49, while Kelter was ninth in the points-scoring charts with 29. The continued output from the two has seen the Eagles rise to sixth in the Series standings, but it has been the inclusion of newer players to the Series that has given Walker’s team needed depth.

Women’s Rugby World Cup Eagle Hope Rogers made waves in Sydney as the U.S. reached its third-ever Cup Final, where Sarah Buonopane also made a sevens debut. Earlier in the season in Dubai, Club 7s standout Bulou Mataitoga – as well as Kayla Canett, Cheta Emba, Kristine Sommer, and Nicole Strasko – had thrown on the USA kit, bringing the total new caps through four legs of the season to 12, enough for an entire squad.

Benefitting from the full-time environment at the Chula Vista Elite Athlete Training Center for athletes training in both sevens and XVs, those named to Walker’s squad have all been capable holding their own against experienced teams like Australia and New Zealand, both of whom are at the top of the standings. Twelve-time capped Eagle Sylvia Braaten has shown the coaching staff her XVs skills translate to the sevens field, and was a late call-up to the Langford squad following Olympian Richelle Stephens’ injury at the 2017 USA Rugby College 7s National Championships. Multiple All-American Mata Hingano has also impressed at camps in Chula Vista, bringing the season total of debutants to 14 with her selection to the upcoming round in Canada.

The depth is strengthened by returns from injury for Emba and Kate Zackary, who have combined for 20 points this year.

The split results against England in Japan will have given Walker’s squad lessons in consistency if it is to continue to challenge for top-four places in the final two rounds of the season. England itself has had its own issues with consistency this season, reaching the Cup round twice in four efforts. Player turnover has not helped, but the rise of young captain Abigail Brown as well as the return of Joanne Watmore has done wonders to bring last year’s third-best team back up to speed heading into the second leg to be held in North America.

Having had Australia somewhat run away with the Series title last year – a crown the Kiwis had held onto since the circuit began in 2012-13 – New Zealand has rebounded well this season, missing out on only the all-North America Cup Final in Sydney (and pulling one over on Australia in the Bronze Final). In three visits to the Final, New Zealand’s taken three gold medals home for a 10-point cushion atop the standings. If the threat of Portia Woodman, on 23 tries through four tournaments, was not enough, 21-year-old Michaela Blyde is currently the Series’ most devastating finisher with a circuit-best 26 tries.

The Netherlands has had an interesting history on the Series, from an initial core team to receiving fewer and fewer invitations to take part in the years since. Completely absent from any circuit competition last season, the Netherlands worked to restore core status ahead of a Series Qualifying tournament in Hong Kong last month. The Dutch Sevens Ladies were bounced from the Quarterfinals of that tournament, however, and will use this weekend’s event as early preparations for their next qualifying campaign.

With the men’s season now through, international focus is strictly on the Women’s Sevens Series from here through the end of June. At this point, only four nations – Canada, New Zealand, Spain, and the U.S. – have qualified for Rugby World Cup Sevens 2018 based on their results at the previous World Cup in Moscow. The top four highest-placed teams at the end of the current season will take one third of the remaining spots, with additional qualifiers to be held in the next year prior to the 16-team tournament in San Francisco. Australia, Fiji, and Russia are currently in pole position with two tournaments remaining, with England hot on the heels of France for the fourth spot in the standings.

Canada Sevens can be watched live in the United States for free on The Rugby Channel, with the action kicking off from Westhills Stadium at 1:30 p.m. ET. Live updates for the Eagles’ matches will also be provided via USA Rugby’s Twitter account (@USARugby).