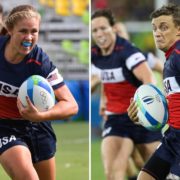 Rio 2016 Olympians Jessica Javelet and Richelle Stephens are set to make their first appearances of the season for the National Team, while AIG Women’s Junior All-American Mata Hingano, 19, will debut for the Eagles in Langford, British Columbia. Walker’s team has been drawn in Pool A with England, the Netherlands, and Series-leader New Zealand. The tournament can be viewed live in the United States on The Rugby Channel.

Captain Alev Kelter and team-leading points- and try-scorer Naya Tapper, along with Joanne Fa’avesi and Nicole Heavirland, have been selected to every Eagles squad this season dating back to the opening round in Dubai last December. The former pair has combined for 211 points through four rounds, with each player ranked in the top 10 of Series points-scorers. Tapper is also just four tries behind New Zealand’s Michaela Blyde for top honors on the circuit.

Veteran Kelly Griffin, the most experienced member of the team, and makeshift forwards Kelsi Stockert and Kristen Thomas will continue to threaten defenses at all corners of the pitch. The team has also been strengthened by the healthy statuses of Cheta Emba, scorer of five tries in the first three legs, and Kate Zackary, who crossed the try line 15 times before sustaining an injury that kept her out of contention for the most recent leg in Kitakyushu, Japan.

Javelet attended her first Camp at the Chula Vista Elite Athlete Training Center this month since scoring four tries in Rio de Janeiro last summer, impressing the coaching staff with her fitness and skills complementary to the current squad. Stephens, whose D1 Elite runner-up Lindenwood University squad trained alongside and against the Eagle residents in Southern California ahead of its trip to Denver for the 2017 USA Rugby College 7s National Championships, also made herself visible to Walker with her form.

An experienced All-American not only at the under-20 level, but also the Girls High School All-Americans powered by Atavus, Hingano’s most recent international experience has been with the USA Falcons. Joined by several Eagles at the Vancouver Rugby Festival, Walker’s latest debutant “brings a different type of player to the squad.”

“The Falcons have really helped us this season,” Walker said of the developmental team that has been coached by former Eagle Emilie Bydwell and Eagles Assistanct Coach Andrew Locke between three tournaments in 2017. “We look forward to doing more Falcons tours.”

Following a silver-medal campaign in Sydney in February and a Bronze Final defeat to Canada at their home tournament in Las Vegas a month later, the Eagles saw a dip in form in Japan. Going 2-1 in pool play – losing only to Canada – the U.S. lost two close knockout matches against England and Fiji on Day Two to reach a Seventh-Place Final. Griffin and Tapper each dotted down twice and young Lilly Durbin accounted for nine points as the team finished off an eight-point standings haul against France.

The Eagles, just four points from fifth place and eight from fourth, open pool play in Langford against England Saturday, May 27, at 1:30 p.m. ET. Their final pool match – against the tournament’s invited team, the Netherlands – is scheduled to kick off from Westhills Stadium at 6:58 p.m. ET. Every match of the fifth round of the 2016-17 Series is being broadcast live on The Rugby Channel, while USA Rugby’s Twitter account (@USARugby) will provide live match updates.