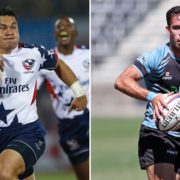 The U.S. is strengthened by the return of Don Pati, who made his debut in Dubai in the first round of the campaign, while Danny Barrett will miss out due to injury. Head Coach Mike Friday has selected debutant Alex Schwarz of Old Blue of New York to travel to Paris and London and a 13th player in 18-year-old Naima Fualaau to be available at the latter event. The Eagles will kick off the ninth round of the Series against Pool B opponent Argentina Saturday, May 13, at 5:06 a.m. ET, with the live stream available to viewers in the United States on World Rugby’s website.

Friday’s squad went 16-8 in reaching four consecutive Cup Semifinals between tournaments in Las Vegas, Vancouver, Hong Kong, and Singapore, claiming one bronze medal from three opportunities and a silver medal in a thrilling Cup Final against border rival Canada in its last outing. Perry Baker, who took over the season’s try-scoring lead (41) heading into the final two weekends, was named to three Dream Teams in that span, while Barrett, Ben PInkelman, and Stephen Tomasin also received recognition in the best-of lists.

The top-four results have given the U.S. its highest standing at this point in a given season – seven points clear of sixth-place Australia and nine points from New Zealand in fourth place. Already qualified for Rugby World Cup Sevens 2018 at home in San Francisco, the Eagles are playing to make history this year.

“Our aim in these next 12 games is to try and break into the top four by the end of the season,” Friday said. “It’s something we nor any other Tier 2 rugby-playing nation has done. We know how hard that challenge will be but we are capable if we commit and play to our potential and will give everything.”

The forward core of Andrew Durutalo, Pinkelman, and Tomasin was instrumental in keeping opponents’ attentions from Baker, accounting for 14 tries in Asia in addition to a tireless defensive work rate. Reserves Matai Leuta and Mike Te’o filled in valiantly when called upon, and Schwarz will be asked to do the same with the influential Barrett not in the team.

“Alex has been excellent in the past two High Performance Camps and is a very intelligent rugby player who has the core skills we require to complement the other forwards in the squad,” Friday said of his newest recruit out of Northeast Academy. “He is extremely fit and will bring real energy to the squad.”

Captain Madison Hughes led the Series in points scored last season and is currently 16 points behind leader Tom Mitchell of England in the table. Baker’s 41 tries have him five points behind his Eagle teammate as the two sit fourth and fifth in the charts.

The Eagles have been drawn in an extremely competitive Pool B in Paris, where the Series made a French return in 2016. Argentina, New Zealand, and Wales have all tasted defeat at the hands of the U.S. this season, and will line up opposite Friday’s national team Saturday at Stade Jean-Bouin. The tournament kicks off with Pool D play at 3 a.m. ET before the Eagles take the field at 5:06 a.m. ET. Fans can stream the event live on World Rugby’s Sevens Series website.