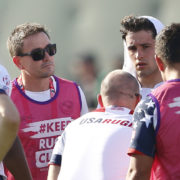 Hughes, along with Head Coach Mike Friday, left the squad in the United Arab Emirates over the weekend following the U.S.’s 4-2, Challenge Trophy-winning tournament at Emirates Airline Dubai Rugby Sevens. Davenport University graduate Anthony Wellmers, named as the 13th man in the squad prior to the opening round of the Series, will move into the team for the Dec. 10-11 tournament in South Africa to make his national team debut.

Friday and Hughes were both with the Men’s Eagles XVs squad during the November Tour assembly, during which time they traveled from California to Chicago to Romania and Spain over the course of four weeks. The captain came on as a substitute as the Eagles fell to the New Zealand Maori All Blacks at “The Rugby Weekend Presented by AIG,” and made his test debut at full back in Bucharest before wearing the No. 15 jersey again in the match against Tonga.

The Dartmouth University graduate has played in 20 consecutive Series tournaments since being named captain ahead of the 2014-15 season, and led the circuit in points scored in 2015-16. Named to the Team USA squad for the Rio 2016 Olympic Summer Games, Hughes also started in each of the team’s five games at Deodoro Stadium.

“We have had to do the right thing by Madison considering the year of rugby he has had,” Friday said. “He has played every Sevens Series tournament the last 12 months and a lot of minutes in those tournaments.

“We felt it was important that Madison was in Dubai for the start of the season to lead the team, but the plan was always that he would not be exposed to more significant travel time and additional playing time as the risk of injury is too high.”

Hughes will start a three-week recovery period upon his return Stateside and will have a further five-week conditioning block leading into the Sydney and Wellington doubleheader beginning in late January. Perry Baker, ranked among the top-three performing athletes in Dubai last weekend, has been named captain under acting head coach Chris Brown for this weekend’s tournament in Cape Town.

The Eagles held South Africa to its closest result in a 19-17 pool play encounter before the Blitzboks defeated Rio gold medalist Fiji in the Cup Final. They will again face the South Africans in pool play as the two have been drawn in Pool A with Australia and Russia.

The U.S. went undefeated on Day Two in Dubai and gained eight points towards the Series standings with the Challenge Trophy victory, but an improved performance on Day One will be targeted by Brown and Co. this weekend. The action starts Saturday, Dec. 10, as the Eagles take on Australia at 5:27 a.m. ET. Jersey numbers will be confirmed prior to kickoff.