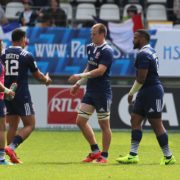 LONDON – This year’s Champion has already been decided, but the 2016-17 HSBC World Rugby Sevens Series will nonetheless conclude this weekend, May 20-21, at HSBC London Sevens.

The USA Men’s Eagles are 13 points clear of Australia in the Series standings, holding an all-time best standing of fifth. Also 13 points behind fourth-place New Zealand, Mike Friday’s squad still has an outside chance of breaking into the top four on the circuit. The 10th round of the season kicks off from Twickenham Stadium Saturday at 4:30 a.m. ET, and can be viewed live in the United States via World Rugby’s live stream.

Not a month after the Eagles played in their first Cup Final of the season in Singapore – and first since the team’s only win in London in 2015 – they were back on the field at HSBC Paris Sevens. Without power forward Danny Barrett in the squad, the U.S. was still able to lead the circuit’s core teams and Spain in points and tries scored. Argentina, which had dealt Team USA a costly blow at the Rio 2016 Olympic Summer Games nine months ago, traveled to Europe with a young team looking ahead to Rugby World Cup Sevens 2018 in San Francisco, but kept within striking distance until the Eagles took control of possession in the second half for a 26-12 opening victory.

Perry Baker was a try-scoring machine for the team on Day One, dotting down twice against Argentina before repeating the feat against Wales in the Eagles’ second game of pool play. For the second consecutive match in Paris the U.S. conceded the first try, but stuck to the game plan to earn the victory. Martin Iosefo leveled the scores early with his first of two tries, and Baker, on a hat trick as the Eagles led, 33-14, with time ticking away, unselfishly gave debutant Alex Schwarz a debut try to cap off the 38-14 win that secured a Cup Quarterfinal place.

New Zealand also saw Baker run in two tries for the speedster’s tally to reach six in three games, but outlasted the Eagles across the 14-minute Pool B encounter to take the pool’s top seed. It worked out better for the Kiwis in the end, as the Eagles were kept from the Cup Semifinals for the first time since the fourth round in Australia with a 26-12 defeat to England. They bounced right back, however, with captain Madison Hughes leveling the Fifth-Place Semifinal against reigning Series champion Fiji and Ben Pinkelman scoring the match-winner in a 24-14 final.

Samoa had previously shown little improvement under the expertise of Sir Gordon Tietjens leading into Paris, qualifying for the Cup round for just the first time all season at Stade Jean-Bouin. A Quarterfinal shutout loss to South Africa followed impressive victories against Australia and Fiji in pool play before a late defensive stand was needed to hold off France in the Fifth-Place Semifinal. The Eagles were ready for the challenge in the final match of the tournament for both teams, building a 19-0 lead despite an early yellow card to Baker for a knock-down of a pass. Maka Unufe’s try to open the second half would prove to be the match-winner as Samoa clawed back for a more respectable 24-19 final score.

Baker’s eight tries were the most of any player at the tournament, including Dan Norton (6), who trails the American in the season’s try-scoring table by four five-pointers. The 40 points’ worth of scoring plays also led the Paris leg, while Hughes tied three other players for the most conversions with 12 successful kicks. Despite those accolades and the continued strong play of the U.S. squad on the circuit, there were no Eagles named to the Dream Team.

In his 30th career tournament, Unufe scored his 50th and 51st tries and passed Folau Niua on the United States’ all-time try-scoring charts for eighth place. The two will no doubt continue to battle in that category while combining on the pitch, with Niua featured by World Rugby as “One to Watch” this weekend. Niua will be suiting up for the Eagles on the Series for the 50th time, second only to Zack Test in appearances.

Schwarz’ game time in Paris was not negligible, as the Old Blue of New York player slotted into a reserve role with confidence instilled by the head coach. Mike Te’o, one of four Eagles currently in London named to an important Men’s Eagles assembly this summer, also provided Friday with cover from the bench, while Don Pati was eased into a return from injury. The Eagles will need all 12 players in the squad – and potentially 13th man Naima Fualaau – in form if they are to see out their best-ever finish on the Series at the site of their only Cup victory in history.

Wales will be wondering how its ball continues to be matched up with the United States’ in pool draws having been grouped with the Eagles for the third consecutive tournament, but will be more focused on how it can hold onto its 10th-place standing in the face of a resurgent France team hot on its heels. Though Wales was in the top half of teams in terms of scoring output, it could not consistently keep teams from scoring in Paris in a failed Challenge Trophy campaign.

Not as strong as in years past, Kenya had its worst showing this season last weekend despite a well-earned draw against England, falling to No. 14 Russia in the 13th-Place Semifinal. William Ambaka (19) and Billy Odhiambo (20) may be leading the way in crossing the try line, but Kenya will need to find more ways to threaten teams if it, too, is to challenge Wales in the standings.

South Africa had seemingly sewn up the Series title – its first since the 2008-09 season – after opening the season with four gold medals from seven consecutive Cup Final visits, but did not technically win the grueling competition until a Cup Semifinal victory in Paris. Only missing the All-North America Final in Singapore, South Africa could equal or better the best-ever points haul on the circuit since New Zealand’s 11-round Series win in 2001-02 with one final Cup Final appearance. Though the Blitzboks have lost several key players to injury throughout the year, their goal will continue to be winning Finals. Should they advance, the Eagles will avoid yet another Cup Semifinal clash with South Africa in London.

It has been an arduous season following Rugby Sevens’ introduction to the Olympic Games, featuring four different Cup winners and a rotating roster of players for most of the 15 core teams. It will all come to an end at the famed Twickenham Stadium this weekend with HSBC London Sevens.

The final leg of the season kicks off Saturday, May 20, with the first pool match at 4:30 a.m. ET. The Eagles’ first match against Wales is scheduled for 5:58 a.m. ET. The entire tournament is being streamed live via World Rugby.